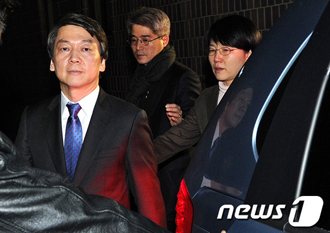 “The ceremony will take place on Dec. 3 [Monday] at 3 p.m.,” Yoo told reporters yesterday. “And former candidate Ahn will also be there.”

According to the former candidate’s campaign officials, Ahn will give a speech at the event and there will be a video played by the campaign volunteers with footage of Ahn’s activities as a candidate. The ceremony will be held at his former campaign headquarters in Gongpyeong-dong in Jongno, central Seoul. Some 300 related officials will attend.

It is the first time Ahn will appear in front of the public after he announced he would resign from the presidential election last Friday after failing to negotiate consolidation rules with Moon Jae-in of the Democratic United Party. Ahn had disappeared from Saturday to Tuesday until he had lunch with members of his campaign on Wednesday.

On Wednesday, Ahn’s aides told the JoongAng Ilbo that the former independent presidential hopeful will support Moon’s campaign to keep his promise to voters that “he would help shift power to the opposition from the ruling party.” The aide also said that Ahn “will make an announcement possibly after he holds a closing ceremony of his own campaign.”

The disbanding ceremony of Ahn’s campaign team was initially scheduled to be held early this week but it had been delayed due to reasons including an incident where a 27-year-old man threatened to jump from the roof of a building next to Ahn’s campaign headquarters, arguing that Ahn was the only person suitable for president.