Prosecutors force their boss to quit

Prosecutors force their boss to quit 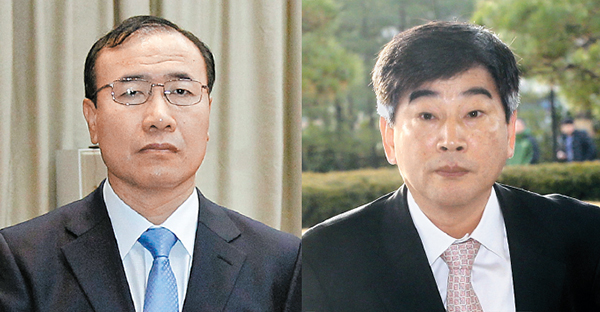 
Prosecutor General Han Sang-dae will announce his resignation today following an all-out war with senior prosecutors over his controversial leadership and a move to shut down an elite investigation unit.

A spokesman for the Supreme Public Prosecutors’ Office said yesterday that Han will announce a reform road map of the prosecution and publicly apologize for the chaos in his office at 2 p.m. today. He will then tender his resignation, the spokesman said. The decision was the outcome of an unprecedented civil war inside the prosecution between Han and senior prosecutors.

The war pit Han against many of his most senior prosecutors, particularly those that worked for the Central Investigation Unit, the most powerful team of the Supreme Public Prosecutors’ Office, which is headed by Choi Jai-kyeong.

Top prosecutors have also been skeptical of the handling by Han of recent high-profile cases involving top businessmen and the family of President Lee Myung-bak.

Two recent cases of prosecutorial misconduct were the spark that started the war. On Nov. 19, senior prosecutor Kim Gwang-jun was arrested on charges of taking about 970 million won ($895,000) in bribes from a construction company and a veteran con man to cover up irregularities.

On Sunday, a neophyte prosecutor was arrested for allegedly demanding sex from a theft suspect in his office and motel to be lenient on her case.

Senior prosecutors held a meeting Sunday to discuss the latest scandals and Han’s responsibility for the disgraces. The group decided he should be forced to resign, but its position was not formally delivered to Han.

In a counterstrike Wednesday, an internal inspection team of the Supreme Public Prosecutors’ Office announced it would launch a probe into Choi, head of the Central Investigation Unit, on charges of disgracing the prosecution’s dignity.

The internal affairs team said Choi gave personal advice to Kim, his college schoolmate, on how to deal with media inquiries regarding his graft charges.

That escalated the war, and it became a contest between forces backing Han and Choi. Demands that Han resign snowballed. Fourteen prosecutors at the Supreme Public Prosecutors’ Office, including members of the Central Investigation Unit, held a meeting Wednesday night to discuss their next moves. Choi did not participate.

“We are not trying to defend the Central Investigation Unit at all cost,” a member of the unit said. “We want the prosecutor general to take time and create a reform plan carefully. But Han appeared to believe that we were trying to push him out. He has lost his reason.”

The prosecutors concluded that they would ask Han to step down.

Han came to his office around 8:50 a.m. yesterday and 10 minutes later, senior prosecutors from the Supreme Public Prosecutors’ Office confronted him to demand his resignation.

Before confronting Han, Chae said prosecutors around the country had various meetings to discuss the situation.

“We concluded that Han can no longer perform the role as the prosecutor general,” Yonhap News Agency quoted Chae as saying. “So we decided to recommend he step down and asked rank-and-file prosecutors around the nation to stop any group actions.”

According to the sources at the prosecution, a shouting match took place during the meeting.

Around the same time, senior prosecutors at the Seoul Central District Office announced their position.

They said Han must make a decision by noon or else they would also confront him.

“We will make him resign today,” a prosecution official told the JoongAng Ilbo.

Seok Dong-hyeon, former head of the Seoul Eastern District Prosecutors’ Office, issued a statement urging Han to step down. Seok stepped down from his post last week after the 30-year-old investigator in his office was accused of having sex with a theft suspect.

Through his spokesman, Han announced at 1:50 p.m. that he will express his intention to resign at a press conference today after announcing his reform road map.

It remains to be seen if the reforms will still include a closing of the Central Investigation Unit.

President Lee was briefed about the chaos by Justice Minister Kwon Jae-jin, sources at the Blue House said. “The people are concerned about the situation, and Kwon should resolve it smoothly,” Lee was quoted as telling the minister.

Although the Blue House said Lee didn’t give a direct order to Kwon, sources said the consensus was that Han’s departure was inevitable.

Under his leadership, the prosecution investigated the president, his family and presidential aides on alleged irregularities involving the purchase of land to build Lee’s retirement home. The prosecution concluded the probe in June this year and cleared all suspects.

Opposition parties said the investigation was muffed. The National Assembly appointed an independent counsel to reopen the case and presidential aides who were in charge of the project were indicted earlier this month.

Han was also criticized for going too easy on SK Group Chairman Chey Tae-won over alleged embezzlement. According to the Hankyoreh newspaper, Han ordered the prosecutors earlier this month to ask for a four-year prison term for Chey, whom they indicted on charges of 60 billion won in embezzlement. Investigators wanted to ask for at least seven years, but Han ordered a lighter punishment, the report said.

Han reportedly is a tennis buddy of Chey.

The prosecutor general was also accused of ordering the prosecution to go easy on a fraud case involving LIG Group Chairman Koo Cha-won and his two sons. The group-owning family was accused of fraudulently issuing commercial paper worth some 150 billion won.