Candidates’ banners vandalized across the country

Candidates’ banners vandalized across the country 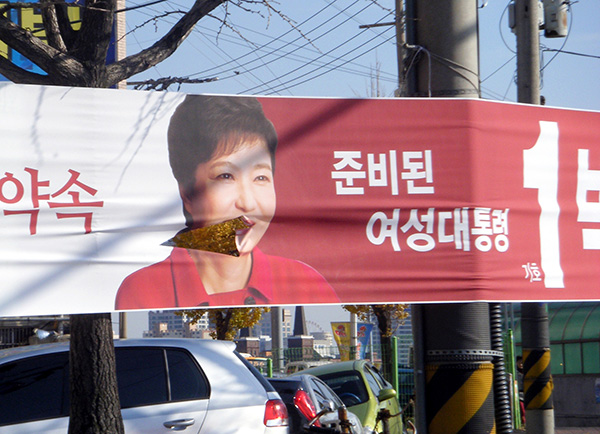 A campaign banner of Park Geun-hye of the ruling Saenuri Party hangs damaged in Jung District, Ulsan, yesterday. Police said banners for candidates are experiencing unprecedented vandalism nationwide including in Ulsan, Busan, Gwangju and Gyeonggi. Provided by the Saenuri Party


Three days after the official presidential election campaign kicked off with attacks from both sides on each candidate’s history, banners for candidates are experiencing unprecedented vandalism nationwide.

The Yeonje Police Precinct in Busan said yesterday a banner for Park Geun-hye, the presidential candidate for the ruling Saenuri Party and Lee Jung-hee from the Unified Progressive Party hung in Yeonsan-dong, Busan, were found damaged.

It said that parts of Park’s face and upper body on the banner look like someone burned them with a lighter and parts of Lee’s nose and neck were also were burned.

A person who damages election campaign material is subject to a maximum fine of 4 million won ($3,600) or a maximum of two years in prison.

In Ulsan, an official of the Saenuri Party reported to police that a banner hung in Jung District had been slashed.

The official said Park’s right cheek was ripped by something like a razor blade. The police later found that the damaged part of the banner is in the same place where she has a scar she received during the 2006 regional election campaign in Seoul.

In 2006, an assailant surnamed Ji attacked Park with a box cutter, leaving a 10-centimeter (3.9-inch) scar on her right cheek. Later in the afternoon, another Saenuri official found another banner with Park on it damaged in a similar way in Ulsan.

“The candidates, especially Park and Moon, are mentioning each other’s past histories in negative campaigning,” said political science professor Shin Yool from Myongji University. “Regionalism is appearing as the election is getting heated and each candidate attacks the opponents’ weakness.”

In Gwangju, Park’s three banners, two in Dong District and one in Seo District, were also found damaged on Wednesday.

The banners in Dong District showed Park’s face and neck cut by a sharp tool. At Seo District the phrase “Under a dictator you have no choice” was written in red spray paint.

The police said they are investigating supporters of the ruling and opposition parties, merchants or patients suffering from depression as they judge that the attacks were done with the intention of making a political statement.