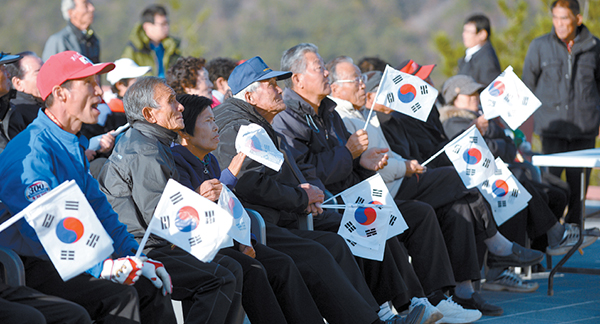 Spectators determined to watch the blastoff of the Naro rocket reveal their frustration yesterday as the launch was halted just 17 minutes before its scheduled liftoff at the Naro Space Center in Goheung, South Jeolla. [NEWSIS]


GOHEUNG, South Jeolla - Just 16 minutes and 52 seconds before it was scheduled to blast into space, the third attempt at launching Korea’s first space rocket was halted for the second time yesterday afternoon due to a glitch in the second stage at the Naro Space Center in Goheung County, South Jeolla.

The liftoff of the Korea Space Launch Vehicle-1, the third attempt after two previous failures, was set for 4 p.m. yesterday after an extensive final inspection Wednesday. A similar delay took place Oct. 26.

The Ministry of Education, Science and Technology announced the launch would be delayed because of abnormal signals from the Korea-developed second stage, or the upper rocket. The error was found in the thrust vector control caused by excessive electrical current.

The delay a month ago was due to leaking helium from a Russian-made connector between the launch pad and the rocket’s first-stage thrust engine. A replacement part arrived from Russia on Nov. 17 and the new launch window was set from yesterday to next Wednesday.

The Korea Aerospace Research Institute (KARI), the developers of the rocket, indicated yesterday that a delay of at least four days will be needed to resolve the problem.

The rocket, also called the Naro, will be transported back to the assembly complex today and KARI researchers will investigate the problem.

But some analysts questioned whether the launch will be done this year because the time needed to resolve the technical problems and the increasing cold temperatures. Then it might be tried in the spring.

The first attempt in August 2009 failed when the satellite didn’t separate from the second stage of the rocket and both plummeted back to earth. It was delayed three times because of software problems.

The second attempt in June 2010 failed when the rocket exploded two minutes and 17 seconds after liftoff for reasons that still have not been determined. It was delayed once.

The hundreds of locals and visitors who gathered to witness the launch yesterday were disappointed.

“I worry that there might be a big problem because of the constant delays,” said a 57-year-old resident of the county, Kim Eun-soo. “This time, I hope they fix the rocket properly.”