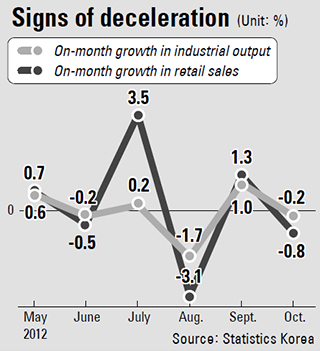 Indicators for the real economy retreated again in October after a brief recovery in September, raising concerns that gloomier economic conditions at home might affect business activities, a government agency said yesterday,

According to industrial output figures released by Statistics Korea yesterday, industrial production declined across all industrial sectors, except for mining and heavy industries, last month.

Overall production in the mining, manufacturing, gas and electricity industries fell 0.2 percent in October from September and 0.8 percent from a year earlier.

The latest output figures came amid lingering concerns that the protracted euro zone debt crisis and uncertainty over the global economy might continue to affect the country’s exports, which account for more than 50 percent of its growth. 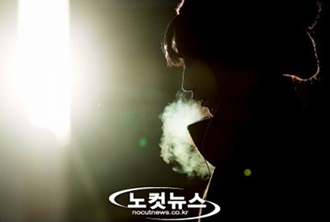 “Despite increases in such areas as semiconductors, parts and tobacco, output declined on a year-on-year basis due to falls in the machinery equipment, visual, audio and communications sectors,” the agency explained.

Adding to the concerns, consumption and business investment are showing few signs of picking up fast, the report showed.

Retail sales dipped 0.8 percent on-month in October, while the figure grew 2 percent on-year. However, the on-year growth rate was slower than the previous month’s 2.3 percent.

Facility investment by companies fell 2.9 percent on-month in October, affected by a decline in spending on precision machinery and transportation equipment, the report showed. From a year earlier, it also contracted 0.7 percent.

Factory operating rates in the manufacturing sector, meanwhile, stood at 75.9 percent, a 0.7 percentage point improvement from a month earlier, according to the report.

On Tuesday, the Organization for Economic Cooperation and Development said it has cut its 2012 growth estimate for Korea from 3.3 percent to 2.2 percent. It also lowered its projection for next year from 4 percent to 3.1 percent.