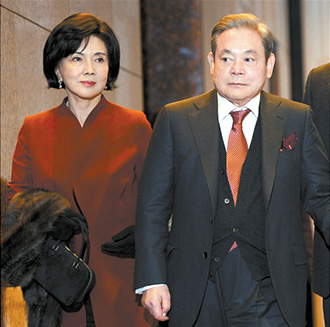 Samsung Chairman Lee Kun-hee asked employees to “embark on a new challenge toward the great future of achieving the goal of becoming a top-notch corporation” in a speech at his 25th anniversary as head of Korea’s largest conglomerate yesterday.

“I pledged to create a new history of Samsung at this very spot 25 years ago,” Lee said at a ceremony at the Hoam Art Hall inside the JTBC building in Sunwha-dong, central Seoul. “Under the goal of making Samsung a top-notch global firm, I have been making efforts to foster talented workers, obtain quality technologies, be a pioneer in the market and contribute to society.”

He also thanked employees, who he said had sincerely supported his move to clean out old practice and regulations in the early stage of his chairmanship, when he was afraid of Samsung collapsing.

“We still have a long way to go,” he continued. “We have to stir up the wind of innovation, further enrich life with Samsung products and services, and contribute to human society.”

The JTBC building is where Lee started his career in 1966. He became chairman of Samsung Group on Dec. 1, 1987. The celebration was advanced by a day since Dec. 1 fell on a weekend.

Samsung had initially planned to skip any celebration, according to insiders; Previous anniversaries were celebrated privately.

But the group changed its mind and held the celebration on the sidelines of Samsung’s annual awards. It may have thought a personal appearance by the chairman on his anniversary was good public relations when anti-conglomerate sentiment is high due to presidential election campaigns.

Some people thought Lee might comment on the anti-Samsung sentiment and the politicians’ calls for “economic democratization,” but he didn’t.

The one-hour celebration was attended by 550 people including Lee’s family members, Samsung executives and awardees. His wife Hong Ra-hee, chief of the Ho-Am Art Museum, and only son and heir-apparent Jay Y. Lee, president and CEO of Samsung Electronics, as well as his daughters - Lee Boo-jin, CEO of Hotel Shilla and Lee Seo-hyun, executive vice president of Cheil Industries - attended.