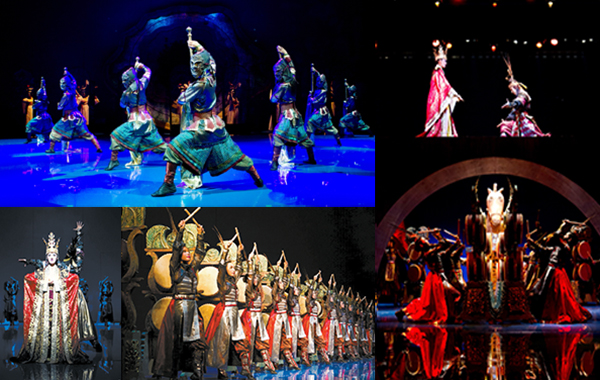 “Miso II - Silla, The Land of Gods,” is a nonverbal traditional performance that blends traditional music and dance. It tells the story of the 1,000-year history of the Silla Kingdom (BC 57 to AD 918) in Gyeongju, North Gyeongsang, the former capital city. Provided by the Chongdong Theater


GYEONGJU, North Gyeongsang - Cities known for their historical attractions tend to be somewhat of a bore after the sun sets and the sites close.

But Gyeongju - the former capital of the ancient kingdom of Silla (B.C. 57 ? A.D. 935) that is regarded as a cultural asset itself - manages to captivate visitors in the evenings through the nonverbal performance “Miso II - Silla, The Land of Gods,” which creatively depicts the city’s 1,000-year history.

The performance opens with the myth of Hyeokgeose, who was born with the “heaven’s vital force,” and his wife Alyeong, who received the energy of water and earth, establishing Silla, the Land of Gods.

The curtain is raised and a half-naked man playing the role of Hyeokgeose depicts his own birth from an egg, as the founding father of the Silla civilization rises through interpretive dance. Then spectacular laser lights flash across the stage and seats, taking the audience through time to the Silla Kingdom.

The performance focuses on the themes of love and loss, centering on the destinies of Doekman, who was the first woman to take the throne, and Yongchun, the leader of the Hwarang, a group of Silla-era knights. When the performance reaches its climax, the flower of Silla’s glorious civilization that succeeded in unifying the Three Kingdoms comes into full bloom.

The Chongdong Theater had previously been presenting Seoulites with the nonverbal traditional performance “Miso” that blends different kinds of traditional dances, music, games and wedding rituals into one of the country’s most well-known folktales, “Chunhyangjeon.”

“Miso II - Silla, The Land of Gods,” is the Chongdong Theater’s new performance, which was staged for the first time on July 1 of last year in Gyeongju. The theater said it hopes to “facilitate tourism by improving Gyeongju’s brand value and contributing to the growth of the local economy.”

In order to do so, the Chongdong Theater joined hands with the Ministry of Culture, Sports and Tourism and the Gyeongju City Government to create “Miso II,” which is a move that helped them “recognize the cultural and historical values of Gyeongju and the infinite potential of culture and arts.”

“Gyeongju is the city of tombs in which the history of a thousand years is buried,” said Choi Jeong-im, the general director of the Chongdong Theater.

“I was sorry that the splendid cultural legacy of 1,000 years had almost been forgotten, and wanted to revive the beautiful history of the Land of Gods hidden under the guise of an artistic performance.

“Today, the focus of tourism is changing from sightseeing to experiences and cultural performances, which often play the role of revitalizing a city by transforming it into a more dynamic place.”

It’s difficult to display the millenary history of Silla in just 70 minutes, but over 200 pieces of Silla costume and props as well as the beautiful melodies of Korean traditional music and dance have managed to revitalize the city’s attraction as a tourist destination.

On Nov. 17, “Miso II - Silla, The Land of Gods” celebrated surpassing 100,000 accumulated viewers in just 14 months since its launch. As part of the celebration event, the theater presented two plane tickets from Korea to Japan to the 100,000th person to enter the venue. The tickets went to Matzuo Horiuchi, a 61-year-old from Japan.

According to Kim Young-in, a public relations official at the theater’s Gyeongju branch, the performance is a good way to wrap up a Gyeongju tour as visitors will be able to “have the unique experience of witnessing historic figures and cultural relics that they saw during the day in various corners of Gyeongju being brought back to life.”

According to the Gyeongju City Government, “Miso II” sought to help boost Gyeongju’s quiet nightlife and vitalize the city’s tourism industry. The theater has been receiving high praise from schools that bring their students to Gyeongju on field trips for “allowing the students to learn about the country’s history through such spectacular performances, as many of them tend to lose concentration going around museums and historical sites during the afternoon.”

Despite the praise, General Director Choi said there is work to be done.

“A lot more homework needs to be done to bring the performance up to the level that creates added value,” she said. One of the tasks is to have an exclusive venue for “Miso II” like the theater has for “Miso I” in Seoul. Currently, the performances are held at the Gyeongju’s World Culture Expo’s Cultural Center.

“Currently, the atmosphere of the venue does not blend into the Silla Kingdom that’s being brought to life on the stage by the performers,” Choi said.

“In order to help ‘Miso II’ become a cultural symbol of Gyeongju like that of the ‘Moulin Rouge Show’ in Paris and the ‘Bolshoi Ballet’ in Moscow, an exclusive venue just for ‘Miso II’ is a must.”

“Miso II - Silla, The Land of Gods” is on an open run at the Gyeongju World Culture Expo’s Cultural Center in Gyeongju, North Gyeongsang. Performances start everyday at 7:30 p.m.