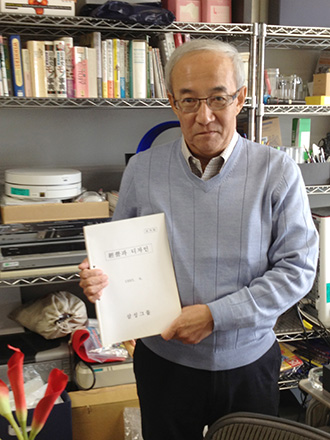 Samsung’s success came after it integrated design into all elements of product development and its executives made all the right moves in terms of strategy and staffing, Tamio Fukuda, a professor at Japan’s Kyoto Institute of Technology, said on Wednesday.

“Samsung created a corporate strategy and pursued this in an orderly fashion while immediately putting its entire staff into action to support it,” he said. “As a result, Samsung succeeded in recycling design as an element of its management resources. It included design in all process of production from product planning to manufacturing.”

Fukuda authored the Fukuda Report, which served as momentum for Samsung’s new management style. The Korea JoongAng Ilbo interviewed him ahead of the 25th anniversary of the inauguration of Lee Kun-hee as Samsung Electronics’ chairman, which falls today.

The professor worked as an adviser to Samsung Electronics for 10 years after Lee was inaugurated in 1987.

He added that the drive for reform over the past decade has served as a foundation for Samsung’s success.

“Japanese electronics companies knew the importance of design but ended up just making gestures. They settled for the domestic market, with a population of just over 100 million people, and were not desperate enough to expand overseas, which caused them to stumble and fall,” the professor said. 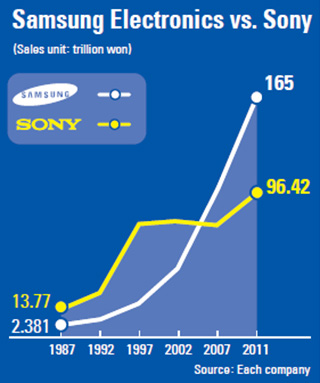 The Korea JoongAng Ilbo also obtained the key content of the Fukuda Report, a section titled “Management and Design,” which has not been disclosed to the public before.

The report contains questions that Lee and other Samsung executives posed to Fukuda about management and design, as well as his detailed answers.

To the question “What is design?” he wrote, it is “not simply creating a form or color of the product, but rather forming or tapping cultural activities to create a new kind of user lifestyle by increasing added value, starting from the study of the convenience of the product.”

Lee, who reportedly read it carefully on a flight to Germany the next day, convened about 200 executives in Frankfurt to announce “Lee Kun-hee’s New Management” style four days later. During the ensuing lecture, he urged them to “change everything except for your spouse and children.”

Fukuda said Lee often expressed his willingness to grow Samsung into a world-leading company, and in order to realize the goal, strengthening design was essential.

The professor also stated his belief that design innovation is followed by comprehensive reform, and that creating change is possible by strengthening input and feedback from below - the main reason he submitted the report to the chairman.

He also discussed how Japanese companies view Samsung by saying that, at least until recently, Japan’s electronics industry either ignored Samsung or knew little about it.

“However, now, many Japanese companies are analyzing the background of Samsung’s huge leap as benchmarking its success,” he said. 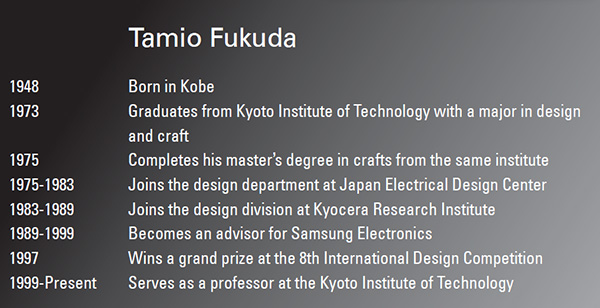 Fukuda first met Lee in June 1993 when he attended the CEO’s meeting in Tokyo at the invitation of Samsung’s local unit. After the meeting Lee chatted with Japanese design consultants, Fukuda said.

“It was a time when companies from around the world, as well as those in Japan, were becoming more conscious of the importance of design. Lee also desperately wanted to hear stories about how to create leading designs,” he said.

At the off-the-record meeting, Lee and the consultants had a deep conversation ranging from design to management, Fukuda reported.

“The chairman poured out some incisive questions and the Japanese designers frantically replied to all of them. We stayed up all night talking,” he said.

He said Lee left an indelible impression on him. “Although he spoke in a low voice most of the time, his questions were very sharp. I got the impression Lee was a great thinker.”

The Fukuda Report was aimed at making note of Samsung’s internal problems, such as inefficiency across different jobs, a lack of information sharing, a lack of understanding between different departments and unclear role divisions, he said.

Fukuda said that managers and designers seemed too estranged.

According to Fukuda, the report suggests adopting new mindsets to improve the design process, as well as more general overhauls for the entire company.

Samsung quickly recognized that in order for it to become a world-class corporation, its designs

must be paramount. This sentiment soon spread throughout the whole organization, Fukuda said.

“Since the 1990s, Samsung’s executives and designers showed a greater commitment to innovation,” he said. “Many innovative strategies led to its success.”

He went on to comment about Japanese electronics makers.

“They should have put their past success in the 1980s behind them and promoted reform. But they failed to do so,” he said. “As they had a strong domestic market of over 100 million people, they did not long to expand overseas. Of course, they also failed in integrating design as a management resource.”

Fukuda said Samsung will have to change with the times and not get complacent or it too will soon get left behind.