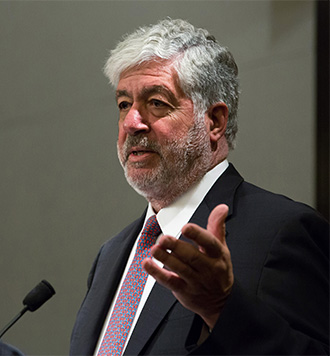 In the wake of the 2008 financial crisis, American Insurance Group (AIG) has named Korea as one of the markets it is focusing on to restore its position as the world’s leading insurer.

The U.S.-based insurance giant has been trimming its workforce over the last few years and is looking to become a top brand again in the industry, AIG CEO and President Robert H. Benmosche said at a general membership meeting in Seoul yesterday organized by the American Chamber of Commerce in Korea.

Under his management, the U.S. insurer sold off more than two dozen of its businesses, and the company has shrunk to nearly two-thirds of its pre-crisis size. This has given it enough money to pay back the $182.5 billion bailout money from U.S. taxpayers it received at the height of the financial crisis.

The company’s balance sheet was also cut nearly into half, to $551 billion from $1.05 trillion, and its staff reduced to 62,000 from 96,000. It has now slipped to fifth place from first among the world’s general insurers, with $39 billion in premiums last year.

Benmosche said he is still trying to make the company sustainable and boost morale by raising sales. The company posted net income of $1.9 billion in the third quarter this year, compared with a loss of $3.8 billion a year ago.

“Clearly, Korea is our focused market.”

The 68-year-old, who took the job in August of 2009, said the company can do a lot more business in Korea because of the strength of the middle class here.

“On the consumer side, I think we need to figure out a way to get more commercial businesses here,” he said.

The former president and CEO of Metropolitan Life Insurance also shared his thoughts about the Korean government’s plan to foster an international financial hub in Yeouido-dong, Yeongdeungpo District, western Seoul. President Lee Myung-bak started the project in 2005, when he was Seoul mayor, to build International Finance Center (IFC).

AIG Korean Real Estate Development has overseen the construction and operation of the IFC which consists of three office building, a hotel and a shopping mall.

“What I think that this building can represent in the new world is where financial skills and capabilities come together and lot of Korean and non-Korean companies come together,” Benmosche said.

“This is about bringing finance people into the community because that energy brings energy.”