Made for mountain roads, not gridlocked cities

Made for mountain roads, not gridlocked cities 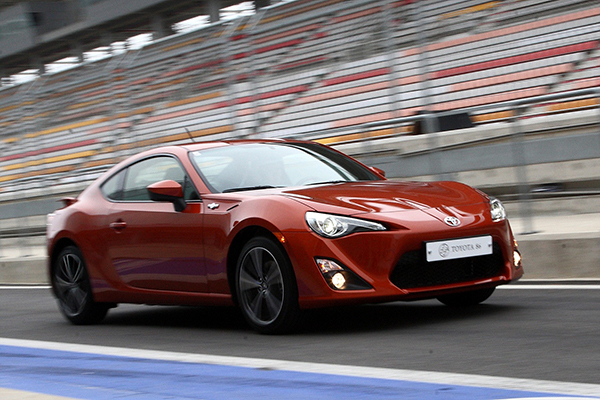 
Fiscal cliffs sound frightening, but those made of rock with trees on top can really knock the bejeebers out of you, especially if you’re driving a stick-shift Toyota 86 with stability control decoupled from sport mode.

With decades of Japanese racing car heritage under its belt, Toyota’s first sports car since 2007 ranks as one of the best values for the money on the market and truly lives up to its “rediscover the fun of driving” ethos.

It’s also great for car-customizing junkies and perfect for troubled youths who like to go drifting when the police aren’t looking. Even though I’d probably go for something with a little more luxury and room, this car would be insanely fun if you were to drive it from Seogwipo to Jeju City over a deserted Mount Halla.

At 38.5 million won ($35,700), the manual version is not only faster but also 3 million won cheaper than Volkswagen’s Scirocco TDI R-Line. The automatic goes for 46.4 million, but why pay more for less fun? Especially as the 86’s afterburners don’t kick in at low revs so you’re often downshifting to compensate. 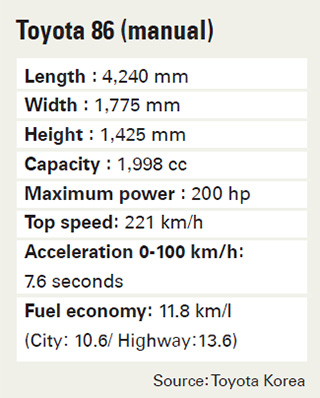 Scratching their heads to keep the center of gravity as low as possible, Toyota’s engineers came up with all sorts of weird and wonderful tricks. They even angled the radiator to better serve Subaru’s 2-liter, 4-cylinder horizontally-opposed, naturally aspirated boxer engine, which comes mated to Toyota’s D-4S injection technology.

The result is a front-engine, real-wheel-drive that weighs in at 1,240 kilograms (2,733 pounds), measures 1,425 millimeters (4 feet, 8 inches) off the ground and makes the utmost of its 200 horsepower and 20.9 kilogram-meter (205 newton meter) torque. It’s billed as the world’s most compact four-seater.

The 86 is purpose-built for people who appreciate big Japanese handbrakes, small steering wheels, back-to-basics cabins and digital clocks straight out of a 1980s Casio catalog. In other words, it’s 80-percent retro, cool, a purist’s dream - and 20 percent cheap and plasticky. There is a big button that says Sport, the air-con dial looks like a small tractor wheel, and the stereo is nothing to write home about acoustically, yet it’s all perfectly functional. There’s a USB port. Everything can be located and operated with your eyes closed.

After all, this is from the same people who brought you tatami mats, sliding doors and green tea ice cream. Stoical here means “we don’t mean to distract you from the business of driving.” The designers even removed all decorative lines from the interior and used a low-gloss grain on top of the instrument panel. In one sense it’s magically stuck in time: The word bling has not yet been invented.

Like the Scirocco, the 86 feels faster than the numbers show. It gets from 0-100 kilometers per hour in 7.6 seconds and keeps releasing power thereafter. Even at 200 km/h in sixth it feels like Rocky Balboa begging to be hit some more. It also has a better power-to-weight ratio than pretty much all of its rivals, including the MX5, Golf GTI and Lotus Elise.

At 0.2 seconds per shift, the six-speed transmission is ridiculously fast and the designers clearly took pains so you can feel the shifts. Like most things Japanese, there’s something fetishistic about it, and you can almost feel the nostalgia pouring out with the exhaust fumes.?

It bores into corners like a drill bit, without losing an inch, but still delivers a comfortable ride. Natural chassis balance means you can control slides, or flick traction control on and stick to the road like Rhino Glue.

But are you going to tire of the choppy first gear when gridlocked near Seoul’s City Hall on a Saturday afternoon? Will the bucket seats give you a backache on long hauls to the provinces? And does changing lanes become perilous after dark due to the overly tinted windows and Cadbury creme egg-sized wing mirrors? Spoiler alert: Yes, after a few hours, and make sure you have insurance. I had to drive with the windows down in the rain at one point, which was hardly ideal.

The front beams could be stronger and the rear-view mirror can cause headaches at night if you’re over six foot as you constantly get laser beamed from behind.

However, no self-respecting driving enthusiast gives two hoots about such trivialities, and that’s pretty much who the 86 - one of two machines lovingly conjured up in partnership with Subaru - is targeted at.

It offers 217 liters of boot space (7.66 cubic feet), pop-down back seats - designed to accommodate spare tires or hobbits, presumably ? a handful of air bags, generous front leg room and a classic sporty facade that never feels over the top. The rear spoiler looks like a tacky Japanese robot, but that’s forgivable.

So if you want much of the go-karting fun of the Mini S Cooper, but without the cartoon-like effects, this is probably your best bet. For more meatiness and raw power, the Mustang is better in a straight line but doesn’t even come close on corners and tops out too quickly. Both cost a few million more.