Storied past, future of challenges

Storied past, future of challenges 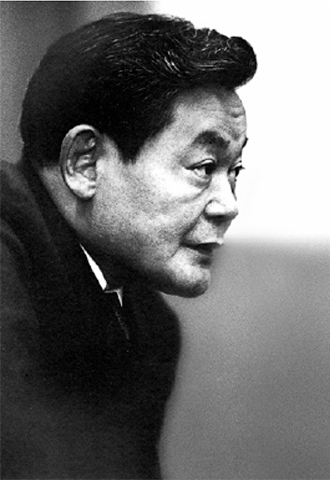 Around a dozen times over the course of his 25-year term at the top post at Samsung, Chairman Lee Kun-hee has ignited a sense of “crisis.”

Most recently, he said during his visit to the Consumer Electronics Show in Las Vegas in January, “I am even more nervous since I feel that if we don’t stay alert we will soon fall behind in a matter of 10 years.”

The remarks came 19 years after he made the famous “Frankfurt declaration,” where he ordered his employees to “change everything but wives and children” and prioritize quality over quantity in a major management overhaul.

His tactic of ringing an alarm bell even when the 74-year-old group is doing better than any other corporation is probably the catalyst behind its astronomical growth while the world is observing its former mentors such as Panasonic and Sony fall down.

Ever since Lee took over the post from his father and Samsung founder Lee Byung-chull, Samsung’s annual sales revenue, which fell short of 10 trillion won ($9.2 billion) 25 years ago, is expected to surpass 384 trillion won this year.

Its assets have skyrocketed more than 50-fold to 435 trillion won and the number of employees has more than tripled to 420,000 in the past 25 years. 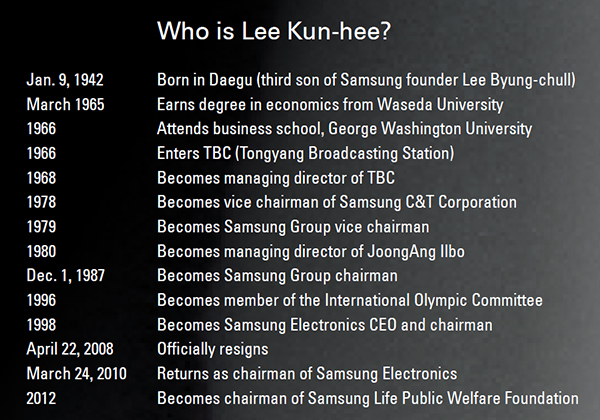 This year, in particular, Samsung saw its brand value leap to No. 9 in the world at $32.9 billion, climbing eight steps from a year earlier, according to brand consulting firm Interbrand.

The figures are telling evidence that Lee has actually carried out the promise of fostering Samsung into a global corporate leader he made at the inauguration 25 years from today.

A total of 19 products made by Samsung subsidiaries were No. 1 in the world as of January this year. From Samsung Electronics, computer memory chips including DRAM, NAND flash and mobile Application Processor have stayed at the top.

The tech king is the world’s largest producer of TVs and smartphones, too. Samsung’s market share in the global TV market is over 30 percent after narrowing gaps with traditional powerhouses such as Sony, Panasonic and Toshiba and Samsung mobile phones accounted for 27.2 percent as of the third quarter.

Lee has also been touted as a key contributor to Korea becoming the host of the 2018 Winter Olympics.
Ever since becoming a member of the International Olympics Committee (IOC) in 1996, the 70-year-old leader made a 12-year-long effort to host the biggest winter event in the world.

He spent more than half of the year in 2010 attending meetings with IOC officials and making various lobbying activities to gather votes for Pyeongchang and after two failures, the city in the mountainous scenic area of Gangwon, was chosen as the venue for the 2018 Winter Olympics. 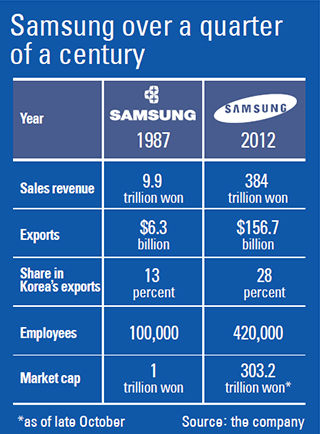 Challenges ahead of Samsung

Despite its monumental progress and achievements, Samsung has a slew of issues to tackle to maintain the growth momentum and fend off widespread anti-conglomerate sentiment in Korea.

Amid growing calls from the political community and civic groups for “economic democratization” ahead of the Dec. 19 presidential election, Samsung currently faces criticism leveled at its cross-shareholding structure that gives absolute power to the group chairman to control all subsidiaries.

The group has accordingly been under consistent pressure and expectations to adopt a holding company system as a measure to simplify its complicated shareholding structure.

One dominant proposal is establishing Everland as a holding company and placing two large business divisions under it.

One would be manufacturing subsidiaries such as Samsung Electronics and the other, financial subsidiaries covering insurance, securities and credit cards.

Recently Lee has been embroiled in a family feud scandal as elder brother Maeng-hee, who is also father of CJ Group Chairman Lee Jae-hyeon, filed a lawsuit against him in April, demanding that the Samsung chairman return 710 billion won worth of shares he had secretly inherited from their father.

Under the Korean culture of prioritizing the first son, the founder’s decision to hand over the control of the group to Kun-hee is considered unusual and that sparked the decades-long conflict between the two brothers and has tainted Samsung’s public image in the meantime.

The will written 16 years before the death of the founder, otherwise known as “Hoam,” reads: “The first son Maeng-hee has no interest in management and the second son Chang-hee does not want to run a large number of companies. The third son Kun-hee initially declined my offer [to take over] but eventually expressed his willingness to ‘succeed although my capacity falls short.’ I have appointed Kun-hee as a Samsung heir and Samsung will be led under his leadership.”

Another worry for Samsung is the conglomerate’s intensifying reliance on its electronics arm. 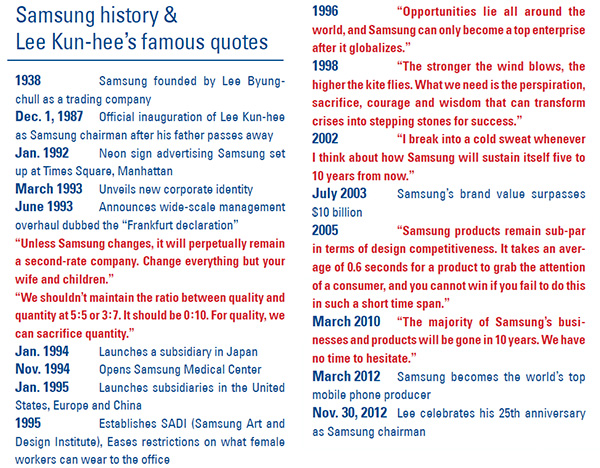 According to the regulatory filing at the Financial Supervisory Service, Samsung Electronics reaped an operating profit of 20.7 trillion won in the first three quarters which accounts for 82 percent of the profits at key listed firms under the Samsung umbrella.

The tech firm’s share of the pie accounts for 87 percent when the single quarter ended Sept. 30, compared with 79 percent a year earlier.

The continued streak of the electronics firm’s profits largely originates from the stronger-than-ever sales of its Galaxy smartphones.

In the third quarter Samsung outpaced Apple to become the world’s top smartphone producer, accounting for one third of the global smartphone market share.

In contrast, many other Samsung subsidiaries have been hit by the struggling global economy.

Five subsidiaries - Samsung C&T Corporation, Samsung Fine Chemicals, S1, Samsung Engineering and Credu - saw their profits retreat in the third quarter from a year earlier. “The gap between Samsung Electronics and other subsidiaries is too huge,” said an executive at one of major conglomerates.