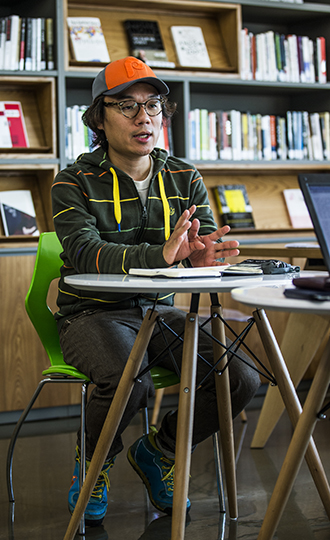 Jang Suk-won graduated from the economics department at the prestigious Yonsei University and worked at SK Telecom before pursuing his true passion: illustrations. [JoongAng Ilbo]

Illustrator Jang Suk-won has been voluntarily painting murals across 40 cities and counties nationwide since 2009. But he wouldn’t simply define the act as the latest buzzword - “talent donation.”

“I have been painting for free not because I am such a good person,” the 42-year-old painter said in a recent interview.

“I want to sustain my professionalism as a painter. Just as private companies contribute to society with social works, individuals are also supposed to do so and that way their social, economic expectancy is extended.”

He added that over the course of the voluntary works, his painting capability has improved, his human network has expanded and he has thus earned his reputation. All those side effects have actually led to paid works.

His paintings are dispersed across libraries, book cafes catering to female married immigrants and community halls across the country from Wanju in North Jeolla, Yangsan in South Gyeongsang, Busan, Cheongju in North Chungcheong to Anseong in Gyeonggi. On the wall of the apartment where he lives in Gusan-dong, western Seoul, he completed a mural with the face of each and every kid in his town.

His voluntary works total up to 100, when T-shirt illustrations, posters and fliers that he drew for free are taken into account.

Wanju was where he started his voluntary work. He first visited the town because the “people were nice and the meals were delicious.” He has thus far painted murals on five public buildings there and even obtained honorary citizenship from the municipal government in August.

He has an unusual career path. Having graduated from the economics department at the prestigious Yonsei University, he worked at SK Telecom, a top mobile carrier, until he turned 35. Then he dropped out of the company to “pursue what he liked most.” The key catalyst was his divorce.

“I thought I led a model life as an elite,” he said, “But once I became a divorced man, I realized all the things that I had considered valuable may not be everything.”

When he made up his mind to start painting, there was only one person who supported him - the owner of the bar he was frequenting at the time. Others tried to stop him, saying things like, “How would you compete with those who have majored in painting since middle school?” or “You don’t know how hard it will be to earn a living through painting.”

But contrary to concerns of people around him, his paintings were highly appreciated. He drew illustrations for KB Card, Hollys Coffee and Puchon International Fantastic Film Festival and many other commercials. He started making a living solely by painting in 2007. “When I do things that I love, the energy consumption level is much lower and I get exhausted less,” he said.

Lately, lectures on his personal story have also become part of his activities. “Talent donation has become part of my personal value,” he says. “I wish there were more programs devised to link those who want to donate their talents.”