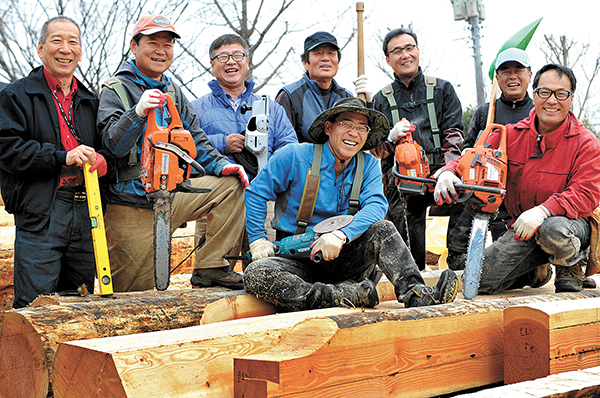 Participants in a farming program organized by the Seocheon Farmers’ Support Center pose for a photo while receiving training on how to saw wood. Founded in 2009, the center aims to help those choosing to move back to the country by teaching farming and carpentry skills. By Kim Seong-tae


A group of about a dozen men in their 40s and 50s gathered in Seocheon, South Chungcheong, as they received a lecture on how to properly saw wood by hand.

The group, composed of former businessmen in major cities, was attending a two-day program organized by the Seocheon Farmers’ Support Center that aims to teach farming and carpentry skills to those who have decided to go back to the land and escape their hectic city lifestyles.

During the program, participants stay at a house of those who already made a successful transition to rural life, seeking their advice for their own foray into farming. Since its opening in 2009, about 40 participants have settled in the city.

Park Chung-sik, a 52-year-old former administrator of a hospital in Seoul who moved to Seocheon early last year, is one of the beneficiaries of the program.

“When I first decided to move here, I was really worried as I didn’t have much information about farming,” said Park.

“But thanks to this program, I was able to make a smooth transition into rural life here.”

Park now makes a living as a carpenter after taking lessons in the field from the support center.

The support center is run by those who came to take up farming in the rural town.

They founded the association for “back-to-the-land farmers” in 2006 with 20 members after experiencing difficulty adjusting to rural life due to a lack of farming knowledge.

“We formed the group six years ago to exchange knowledge about farming and better adapt to the countryside,” said Jeong Kyung-hwan, director at the center.

In February of 2009, the 20 former urban citizens in Seocheon officially launched the Returned Farmers Association with the aim to help those who wanted to do what they had done.

In November of the same year, the association was granted access to a closed school and transformed it into a support center for would-be farmers.

The association members set up classrooms designed to teach farming and carpentry skills to the next generation.

Lectures are offered by those who are now experienced farmers. Local residents are also invited to give a lecture.

Word about the support center program has spread among those wishing to migrate to the countryside.

The association now has over 400 registered members.

Recognized for its contribution to better prepare those who have opted for rural life, the association was awarded the grand prize for Lifelong Learning by the Ministry of Education, Science and Technology on Nov. 23.

“Living in an aging society means that we have to keep learning new things to better prepare for our future no matter how old we are,” said Lee Byung-do, president of the returned-farmers association.

“We will continue to provide quality programs to educate and help new farmers successfully settle in the countryside.”