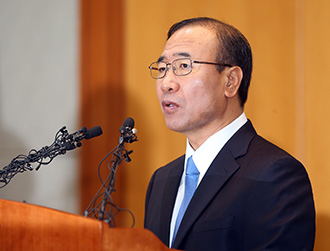 The country’s top prosecutor general resigned yesterday after a rebellion by his senior prosecutors, who resisted his attempt to disband an elite investigating body and also thought he let corruption cases against the president’s family and big businessmen slide.

The fulcrum for the rebellion was two recent cases of prosecutors being accused of taking money or sex to go easy on people they were investigating.

“I am stepping down from the post today,” Han said. “First, I apologize for shocking and disappointing the public with the shameful graft and sex scandals involving prosecutors. I will accept any criticism and reprimand for people who abused their power and committed crimes while forgetting their duty to punish criminals.” 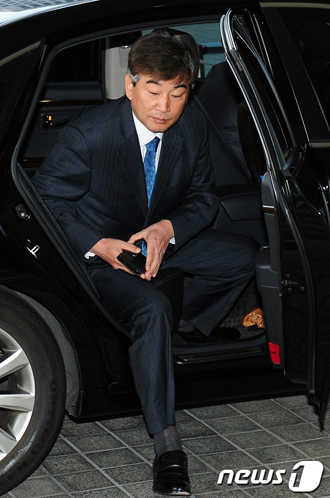 On Thursday, Han said he would address the media yesterday afternoon, announce a road map to reform for the prosecution and ask the president whether to retain him or not. Instead, he hurriedly called the press at 10 a.m. and spoke for less than three minutes, aired live around the country, without hiding his bitterness.

“A departing person must remain silent,” Han said. “I will leave all pending issues including prosecutorial reform to my successor and bid farewell with a lofty bearing.”

Han’s exit brought an unprecedented civil war inside the prosecution to a bloody end. When he was named to the post, Han promoted an ambitious overhaul of the prosecution, but the plan faced staunch resistance from his top prosecutors. He was also accused of ordering prosecutors be lenient on cases involving owners of the conglomerates.

Tensions between Han and senior prosecutors reached a new peak when he pushed forward a plan to shut down the powerful Central Investigation Unit, which handles high-profile cases, and ordered an internal probe into the elite unit’s head, Choi Jai-kyeong, on charges of giving advice to his fellow prosecutor, Kim Gwang-jun, on how to deal with media inquiries about his graft charges.

Kim is accused of being bribed to go easy in an investigation of a construction company and a con man.

Choi said yesterday morning he will take responsibility for the messy situation in the prosecution, hinting at an intention to resign. “As soon as the internal inspection is concluded, I will assume responsibility as a public servant,” he said.

According to the Blue House, President Lee Myung-bak accepted Han’s resignation yesterday. “Han’s departure must serve as an opportunity for the prosecution to thoroughly look at itself and reform to meet the changed times,” Lee was quoted as saying by his spokesman Park Jeong-ha. “That will only help the country’s development and restore the people’s trust in the prosecution.”

Lee also expressed regret that the prosecution has lost public confidence with the series of embarrassing scandals. “Justice Minister Kwon Jae-jin must make sure that the prosecution won’t experience any more turmoil and perform its duty in managing the presidential election.”

The prosecution will be headed by Deputy Prosecutor General Chae Dong-wook. Lee’s presidency ends in February and it’s possible that the top prosecutor post will be left vacant for the new administration to fill.

Senior prosecutors of the Supreme Public Prosecutors’ Office issued an apology to the public for the internal discord.

Han was the country’s 38th prosecutor general. Yesterday he became the 11th top prosecutor to leave the post before his two-year-term ended. The two-year tenure was introduced in 1988 to guarantee political independence of the prosecution, but only six survived their full terms. Han was appointed in August 2011 after predecessor Kim Joon-gyu resigned to protest the legislature’s prosecutorial reform initiative. At the time, lawmakers made an attempt to shut down the Central Investigation Unit and redistribute investigative powers between the police and the prosecution, and prosecutors resisted the move.

While his predecessors fought to protect the Central Investigation Unit, Han made an attempt to shut it down, causing the prosecutors’ revolt.

The next administration - whether it will be the conservative ruling party or the liberal opposition party - will be pressured to overhaul the prosecution, although it has long resisted reform from the outside.

The campaign of Moon Jae-in, presidential candidate of the largest opposition Democratic United Party, said yesterday that Han’s resignation was “karma,” or retribution for Han’s misdeeds. Moon’s spokesman Representative Jin Sung-joon said President Lee must apologize to the people for the prosecutorial crisis and Justice Minister Kwon must step down.

Spokeswoman Kim Hyun said other senior members of the prosecution’s leadership should resign for their coup.

The ruling Saenuri Party said yesterday that its candidate Park Geun-hye will soon announce a reform plan for the prosecution. “The announcement will likely come this week,” said Park campaign spokeswoman Chung Ok-nim.

She also said it was fortunate that Han resigned to calm the situation and urged the prosecution to do its best to restore public confidence.

Park’s proposal for prosecutorial reform will be prepared by Ahn Dae-hee, an ex-prosecutor and a former Supreme Court justice who currently heads her political reform committee. Blaming the Lee administration for the latest chaos, Ahn told the JoongAng Ilbo that the prosecution must undergo thorough reform to become a law enforcement body, not an elite group that savors its power.