NK leader, favorite to become Time's Person of the Year

NK leader, favorite to become Time's Person of the Year 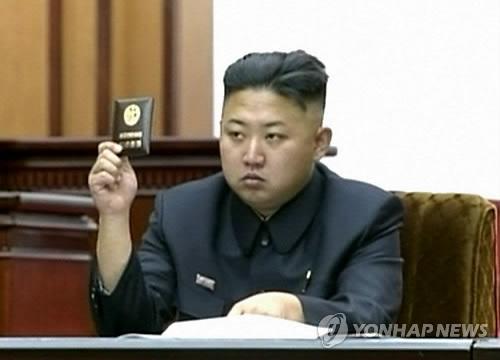 North Korean leader Kim Jong-un remains the solid front-runner in Time's poll of influential figures in this year's world news and culture for good or ill, according to the U.S. magazine.

As of noon on Friday, Kim had gained 1,248,275 votes, followed by Egyptian President Mohamed Morsi with 332,029 and Malala Yousafzai, the Pakistani teenage activist shot by Taliban attackers for advocating girls' rights to education, with 155,904.

The North Korean ruler, known to be in his late 20s, took the helm of the communist nation about a year ago after his father, Kim Jong-il, died after a 17-year dictatorship.

Kim, said to be have been educated in Switzerland, appears to have consolidated his grip on power, but his leadership remains largely untested.

There have been no significant signs of North Korea changing its course towards reform under his rule.

He pressed ahead with a long-range rocket launch in April, less than two months after a deal with the U.S. to suspend some of his regime's nuclear and missile activities.

In a possible show of his interest in American culture, Pyongyang's tightly controlled state media showed Mickey Mouse and other Disney characters prancing at a performance attended by Kim.

In 2011, "The Protester" was named Time's Person of the Year. The magazine said dissidents across the Middle East, Europe and the U.S. heavily affected global politics.

Facebook founder and CEO Mark Zuckerberg got the honor a year earlier. (Yonhap)