Team Korea too much for Japan

Team Korea too much for Japan 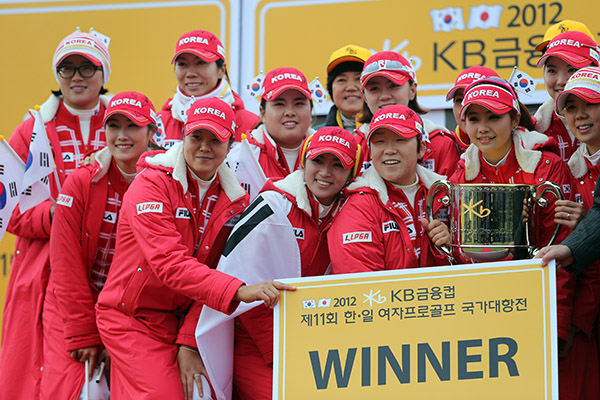 
Top LPGA players led a late charge yesterday as Korea overcame a strong rally by Japan to win the renewed rivalry between the two Asian neighbors.

At the par-72 Bayside Golf Club in Gijang County, Busan, Korean women combined for five victories - four of them by LPGA regulars - against four losses and three draws yesterday. Korea bagged five victories against one loss on Saturday and amassed 23 points over Japan’s 13 points through the two-day event.

Korea won the last KB Financial Group Cup Korea-Japan Women’s National Golf Team Match Play Competition held in 2009. It was not played the past two years. Since the event began in 1999, Korea has six victories, three losses and two draws.

A total of 13 players joined forces for a star-studded Team Korea, including five LPGA money leaders and three of the top JLPGA earners, against the domestic players-only Team Japan.

The five LPGA players - Park In-bee, Choi Na-yeon, Ryu So-yeon, Shin Ji-yai and Yang Hee-young (Amy Yang) - are all ranked in the top 14 on the world’s biggest women’s golf circuit and they well lived up to expectations, winning at least one of their games through two days.

Korea, coming off a 10-2 lead after Saturday’s foursome and four-ball match, sought a comfortable finale in the all stroke-play second round yesterday, but Japan came back to tie at the halfway point.

Jeon managed to put Korea on the scoreboard after the first two Koreans, Lee Bo-mi and Han Hee-won, lost to Hiromi Mogi and Yukari Baba by two strokes and one stroke, respectively. It was only one point, though, as Jeon’s four-under 68 tied with Mihoko Iseri.

The three next players from Team Korea - Kim Ha-neul, Kim Char-young and Yang Hee-young - combined for just one point thanks to Kim Char-young’s tie as Japan offset Korea’s lead with 10 points from the six games.

Heo Yoon-kyung, who suffered Korea’s only loss on Saturday in a four- ball game where she paired with teammate Yang Soo-jin, brought Korea back to lead, 14-12, with a four-stroke win over Rikako Morita. Yang Soo-jin also carded a face-saving tie with Maiko Wakabayashi, but it was the four LPGA stars who stopped the rally.

Park was named MVP of the event, adding another memory to a spectacular year. She was the LPGA’s leading money winner and ended a four-year title drought with two tour victories this year, including the Evian Masters in September. She also won the Vare Trophy for best tour average score.

“There are many outstanding players here and it is an honor to be chosen,” Park said after being named MVP.

Meanwhile, the Korean organizers announced before the competition they would field only domestic players during the next rivalry event.

No Japanese playing overseas participated this year due to the absence of JLPGA rules that make it compulsory for them to play in events where they represent their country. The KLPGA has such a rule but plans to abolish it, officials said.