‘Aida’ directors in love with D-Cube

‘Aida’ directors in love with D-Cube 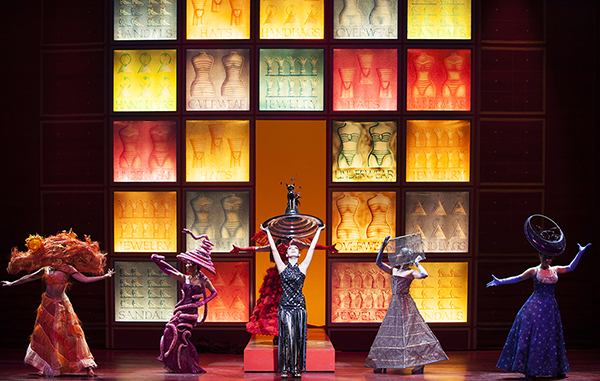 A scene from “Aida” in which Amneris sings “My Strongest Suit.” It is said to be the musical’s “most colorful and showy” scene, according to the organizer.


Ancient Egypt has come to life in Korea for a third time.

When Elton John and Tim Rice’s “Aida” first came to Seoul’s LG Arts Center in 2005, the organizers, Seensee Company, never imagined there would be a second, let alone a third, production. This large-scale musical takes two months just to prepare the stage.

But Keith Batten, associate director of “Aida,” says one of the major reasons why they announced another run was because of the capital’s new theater, the D-Cube Art Center in Sindorim. The musical will be performed in Seoul until April 28.

“This venue is the perfectly sized theater for a show like this,” said Batten during an interview after the press rehearsal of “Aida” on Thursday. “This show has never looked as good as it does in this theater. The set is the original Broadway set that has been brought here to do this production, but it didn’t look this good even when it opened in New York.”

This new theater in western Seoul, which opened just over a year ago, has already positioned itself as one of Korea’s best musical theaters. “Mamma Mia!” and “Chicago” have already taken the stage.

One of the major merits of the venue, according to the director, is that despite being a grand theater seating 1,200 people, the distance from the very end of the auditorium to the stage is 28 meters (91 feet), which ensures a “satisfying” view even from the last row.

“[The show] looks better here than anywhere else in the world because of this beautiful theater and the way the auditorium frames the stage,” Batten says. “Because the theater has this intimate feeling, I think this is going to be the best production we’ve ever done.”

Ostensibly based on Giuseppe Verdi’s opera of the same name, Elton John and Tim Rice’s “Aida” opens and closes in an antiquities museum as visitors casually take in the images of ancient Egypt and Nubia.

An Egyptian captain, Radames, returns from a successful military foray into Nubia with captives in tow. Among the captives is Nubian Princess Aida, whom Radames presents as a gift to his fiancee, Princess Amneris, the pharaoh. 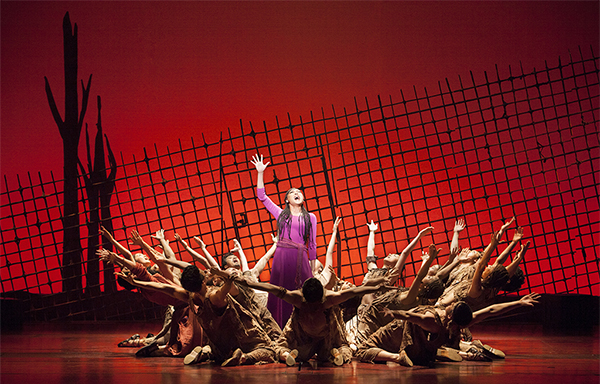 The famed “Dance of the Robe” scene in Act I of “Aida,” during which the princess of Nubia sings of her responsibility to save her people while balancing her love for Radames of the enemy troops. Provided by the organizer


During the press rehearsal last week, two casts for each of the three principal roles - Aida, Radames and Amneris - all took part in performing some scenes, each showing off their singing, dancing and acting skills. They were chosen through intense auditions among 600 candidates who competed for the roles.

This production of “Aida” is the first in the world to have a double cast for the three principal roles. It also has two directors, including Kolleen Park, who was present at the interview.

“When we were given this new opportunity to revisit the show, it was a big challenge for us because we didn’t want to come back and just recreate something or do less than what it was like the first or the second time,” Batten says.

“Our objective was to make this production the best yet. And that’s what we’ve done. We have two of each of three principal characters. I think it’s extraordinary as it showcases the Korean talent more and at the same time it keeps the show more alive, because every time you come and see the show, you’ll see a different configuration of these incredibly talented actors.”

Korean singer Sonya, who had revealed her emotional distress for having a “distinctive” appearance as she was born to a Korean mother and an African-American GI father who was stationed in Korea for five years, is one of the Aidas.

“I want to express Aida as sincerely as I can,” she says. “I used to hide a part of me on stage but this time I want to be honest to myself. I will express my father’s vibes in the musical rather than keeping them in the dark.”

Park also praised Sonya’s “exotic” appearance, saying that “her special appearance fits the character of Aida, the princess of Nubia.”

Actress Cha Ji-yeon is also one of the Aidas for the production. She had auditioned for the role in 2010, when the directors turned her down despite her unique voice because they only cast one person for the role. Former girl group member Ock Joo-hyun took the role of Aida in 2010.

When Cha auditioned for the role this time, organizers said that Batten was the “happiest person to see her.”

The best voice in the show, however, seems to belong to Jeong Seon-ah, who crafts a delightful comic performance in Act 1 as the self-infatuated Amneris.

In fact, Jeong, who had performed in the same role in 2010, is the only one who joined the cast without an audition. The actress says that at first she sought the Aida role. When she was 22, she had auditioned for the spot in 2005. Despite stunning the directors with her remarkable singing ability, they had to turn her down as she was “too young.” Five years later, she auditioned for Amneris and was unanimously voted in by the staff.

“It was my mistake to audition for the role of Aida. I think it is important for an actor to know oneself and how well and how much you can express a certain character. But I didn’t know that. I am cut out for Amneris, not Aida,” Jeong says.

The actress also praised the venue saying that “you can never lie on this stage.”

“I first visited this theater as a member of the audience to watch the musical ‘Mamma Mia!’ and I felt so close to the actors on stage and I could clearly see their facial expressions and moves,” Jeong says.