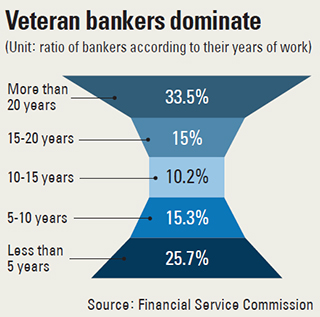 A branch manger at KB Kookmin Bank said he has lost a lot of weight in the past month due to stress-related back pain.

“Our year-end performance evaluation is coming up, but recently a major client withdrew 4 billion won [$3.69 million] at once,” he said on request of anonymity. “It’s eating me up inside because my performance has dropped sharply.”

As of yesterday KB Kookmin Bank has started evaluating the performance record of staff at its branches nationwide.

The branch manager said he went on marketing sales campaigns across the country as he felt nervous about his performance. “I even played golf with major clients while strapping on a waist band [because of his injury].”

A branch manager at Woori Bank said he has been having trouble getting to sleep as a small midsize construction company, which borrowed a huge loan, went bankrupt in the first half of the year and failed to cover the interest on its debt.

“When one company doesn’t pay back its loan, things at local branches exacerbate because indexes for profit and overdue debts get ruined,” he said. “A lot of branch managers will be under severe distress as the year-end evaluations approach.”

Many of the bank’s branch managers are facing some heartache this winter, especially as they are faced with one of the worst sales environments in recent memory this year. The fears are heightened by recent rumors that the banks are mulling corporate restructuring, including layoffs, and merging or shutting down branches.

On top of this, some banks are applying stricter evaluations than in the past.

KB Kookmin Bank is one such case. In 2011 it announced a “two strike” evaluation system that will be applied this year.

Previously, branch mangers were evaluated on their performances over the last three years. The 10 percent with the lowest scores were relocated to remote areas where they are both the manager and the only employee. This is seen as a form of pressure to encourage the employee to voluntarily retire. However, starting this year, the evaluation has been reduced to cover their performance over the last two years.

Branch mangers are not too happy about the new system, saying two years is too short to evaluate their performance fairly as it takes time to build up close relationships with major clients.

“It’s like you’re being pushed to the exit, just when you think you’ve finally grabbed a regular customer and are ready to really get down to doing business,” said one KB Kookmin Bank branch manger.

“The stress is so intense that some managers have given up competing and request their branch be closed.”

However, the banks say competition is inevitable among branch managers.

According to the Financial Services Commission, bankers in their 40s and older almost account for half of the employees in the banking industry. Furthermore, one out of every three have worked in the industry for more than 20 years.

“Too many employees in their late 40s or early 50s have caused a backlog in human resources,” said Kim Hyeong-tae, vice president of Kookmin Bank’s human resources division.

“We decided to shorten the evaluation period to stay afloat amid heavy competition with other bank branches.”

Merging branches is another measure that is putting a lot of managers under stress.

Woori Bank has decided to either merge or close 15 branches next year that are seeing deep deficits.

Other banks, including Shinhan Bank, are taking similar steps to enhance the efficiency of their operations.

“It’s really hard to draw in customers, especially when the entire country is under a cloud due to the sluggish economy,” said a branch manger of Shinhan Bank. “We are in fierce competition with other branches over attracting each other’s customers by offering higher or lower interest rates on deposits and loans, respectively, by as little as 0.001 percent.”

Financial experts warn that the performance-related stress in the industry is heading to a level where it is affecting the sustainability of bank operations.

“As even the banks’ CEOs are being evaluated on their short-term performances, the system pressures them to squeeze every last drop out of their employees to improve performance,” said Kim Woo-jin, research fellow at the Korea Institute of Finance. “Some bank employees even say it’s better not to get promoted.”

Rhee Hae-chun, economics professor at Sungkyunkwan University, said that igniting too fierce competition among workers is not productive especially in an aging society where there are more likely to be older employees.

“Pushing out employees that have fallen behind in the race for higher pay and a better position is not suitable for an aging society like ours,” Rhee said.

“We need to review a variety of employment methods to improve things such as setting up a peak wage system.”

This would allow older staff to work pass their retirement age for lower pay, he explained.