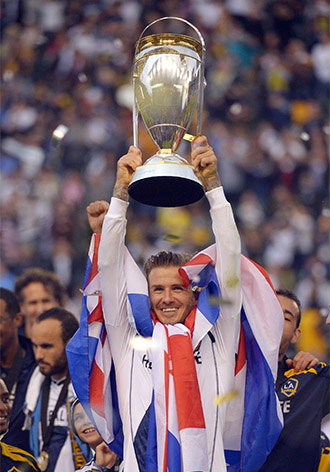 CARSON, California - David Beckham stood on the podium with his three sons, a Union Jack knotted around his Los Angeles Galaxy jersey. With a practiced lift and a broad smile, he raised the sparkling MLS Cup over his head to a raucous ovation amid a confetti blizzard.

Now that’s a Hollywood ending worthy of a star. Beckham wrapped up his MLS career as a two-time champion Saturday as the Galaxy came from a goal down to beat Houston Dynamo 3-1. With a stirring second-half surge capped by penalties by Landon Donovan and Robbie Keane, Los Angeles won its fourth MLS Cup, tying DC United for the MLS record.

The Galaxy also gave an appropriate farewell to Beckham, the 37-year-old former England captain who transformed the league and his team over six seasons in Los Angeles.

“It’s been a successful six years here, and now that we’ve won the second one, it’s even more satisfying,” Beckham said. “I just hope people have enjoyed me playing here. It’s what I always hope for when I step on the field.”

Beckham will play elsewhere in the new year before eventually returning to MLS as a team owner. With rumors linking him everywhere from Sydney to Paris, he hasn’t disclosed his immediate plans beyond a Christmas vacation back home in England.