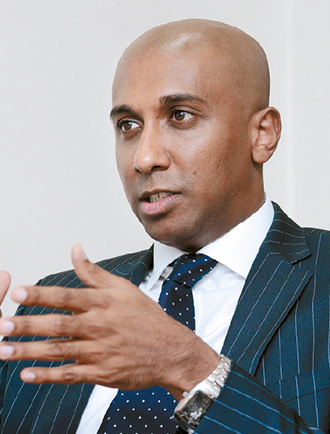 In just two years at the helm of Sanofi Pasteur Korea, a French vaccine manufacturer, Ranga Welaratne is proud of having already shaken the company to its foundations.

“For the first time, we decide to change the operating model.

That has given us really good traction going forward,” the 38-year-old Sri Lankan told the Korea JoongAng Daily, explaining how he bravely ditched a business model that had served the company for over three decades.

“Multinational companies have been working in Korea for many years but they are used to a particular model,” he said. “So one of the major achievements we achieved in the last couple of years is changing this [and] I think it’s going to give us long-term benefits.”

This means relying less on local distributors and more on direct contact with customers, he added.

“What we have done is decided to go directly to customers, because we think we’re the experts in the field of vaccines, so we believe we’re better equipped to deal with our customers,” he said. “We changed from a distributor model to a direct model at the beginning of this year.”

When Welaratne first came to Korea he was looking for a new vision and way of doing things, he said.

“A lot of people said that we needed to change, but we had no idea how.” As such, he spent the first six months devising new strategies and plans.

With Sri Lanka torn apart by civil war, Welaratne left for Australia at the age of 18. He studied engineering and ended up getting an MBA at Monash University in Melbourne before joining Sanofi Pasteur in 2003.

He credits his background with making him more personally engaged with corporate social responsibility programs.

“I think one of the key values I grew up with was the value of human life. And today when I see suffering, my instinct is to rush in and help,” he said.

In October, Welaratne and his employees went out to vaccinate 5,000 homeless and vulnerable people in cooperation with the Seoul City Government and other local bodies.

All 60 employees at Sanofi Pasteur visit homeless shelters and provide people there with food once every two months. On Dec. 13, they plan to again give them hot meals.

Sanofi Pasteur has high hopes for 2013 as it expects to see the fruit of closer cooperation with three other affiliates of the group.

“We’ve got the right foundation, the right operating model, and the right organization set-up, so now it’s time to experience the benefits from the structure we have put in place,” he said.

“I [expect] double-digit growth, not just in numbers but in our contribution to the society.”

Currently, each general manager at the four affiliates - Sanofi-Aventis Korea, Sanofi Pasteur, Genzyme Korea and Merial Korea - is a member of the Integrated Country Strategic Council for Sanofi Group in Korea, and yet the four companies are operated as separate legal entities.

They will move to a bigger building in January in a bid to enhance ties and create synergy effects across the healthcare market, Welaratne said.

He highlighted the need for greater partnership between the private and public sectors for Korea to become a key market in the global pharmaceutical business.

“The Korean government has a big vision to be one of the major pharmaceutical countries by 2020, and I think we can contribute to this vision,” he said.

“We can help Korean companies enter overseas markets, since we have critical experience, registration experience, and the sales and operating capability in other countries to go beyond Korea.”

He also reserved much praise for his team. “I’ve never seen this tenacity in people [in other countries],” he said. “Koreans really want to get things done. They are so much faster and do so much better.

“What we’ve achieved as a company in the last two years would have taken five to seven years in other countries, so I am proud of my team in Korea.”