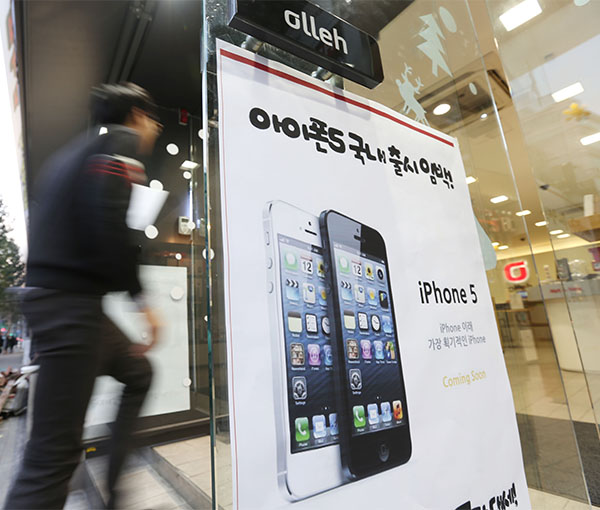 A poster at the entrance of a KT store in Seoul Friday afternoon shows the release of iPhone 5 is impending. KT and SK Telecom accepted preorders beginning at 10 p.m. that day. [YONHAP]


Although advance orders for the long-awaited and much anticipated iPhone 5 began at 10 p.m. Friday, SK Telecom and KT were peppered with criticism from prospective customers accusing Korea’s two biggest providers of colluding on phone prices and calling plans.

“After comparing calling plans, it turned out that fees for the iPhone 5, including discounts applied with the mandatory subscription period of 24 months, offered by the two carriers are identical,” said Yoon Mi-ra, a 34-year-old company worker who ordered the new iPhone that will hit stores Friday. “[Prices are] too identical to be just a coincidence. They seem to have fixed prices at the last minute. Where has the competition gone?”

But critics say the carriers are deceiving consumers by offering special discounts on handsets of between 10,000 and 20,000 won monthly, depending on the price of the calling plans that are available only in 24-month or 30-month subscriptions.

They suggested customers buying the iPhone 5 are paying more for the smartphone as the carriers charge more for LTE than 3G calling plans and they also have reduced the discounts.

Despite mounting criticism, the iPhone 5 is selling like hotcakes. The two carriers estimate more than 200,000 have signed up for phones during the weekend.

KT said 130,000 people ordered the iPhone 5 by midnight Friday. That figure is commensurate with the one-day numbers for the iPhone 4S, the company said.

SK Telecom said it sold all of the 50,000 iPhones it allocated for online just two hours after it began accepting preorders.