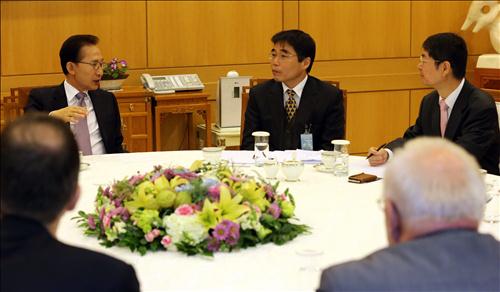 President Lee Myung-bak holds an interview with Yonhap News and five foreign news wire services at his office in Seoul on Nov. 29, 2012. (Yonhap)

The planned test fits the pattern of Pyongyang's behavior of escalating tensions and intensifying anti-conservative rhetoric ahead of key elections in South Korea to underscore its point that Seoul should have liberal leaders softer on the provocative regime.

In the run-up to April's parliamentary elections, the North also heightened tensions with a string of steps to ready for a long-range rocket launch. Pyongyang fired off the rocket two days after the polls, claiming it was a satellite launch, though the rocket exploded in mid-air soon after takeoff.

"North Korea has continued its campaigns to influence South Korea's elections. The latest case in point is its attempts to interfere with the general elections in the South in April. The North has also been trying to overly interfere with the upcoming presidential election in the South," Lee said in a statement prepared for an interview Thursday with Yonhap News and five foreign wire services.

"Such attempts by the North, however, only backfired and brought about results contrary to what it intended to happen. North Koreans must recognize the grim fact that their futile campaigns only aggravate the feelings of South Koreans toward the North," he said.

On Saturday, North Korea said it will launch its Unha-3 rocket between Dec. 10 and 22 to put what it claims an earth observation satellite into orbit. But outside countries and experts believe that it is a disguised test of a long-range missile that may target the United States.

Recent satellite imagery has shown increased activity at North Korea's missile launch site near its border with China, including new tents and the movement of people, trucks and oxygen tanks, with experts warning that a launch could come this coming weekend at the earliest.

During the interview, Lee said it is true the North is making launch preparations, though it is unclear whether it will forge ahead with a firing and if it will be before or after the Dec. 19 election to select his successor for a five-year term.

"But even if they test fire a missile, it will not have a big impact on the election," he said in the interview with news agencies that included the AP, Kyodo, Xinhua, DPA and Itar-Tass. "They may have a preferred candidate, but I believe there won't be any impact on the outcome this time too."

Lee warned a missile launch would be a violation of U.N. Security Council resolutions that ban Pyongyang from any ballistic activity because the technology can be used to develop a delivery means for nuclear weapons. Experts say a satellite-carrying rocket is basically no different from a long-range missile.

In New York on Thursday, a U.N. Security Council committee overseeing sanctions on North Korea warned against a launch, with Portuguese Ambassador Jose Filipe Moraes Cabral, who chairs the committee, saying, "It would be extremely inadvisable to proceed with the test."

Lee said the North's leadership change after Kim Jong-il's death a year ago gave the regime a chance to change course. He urged the regime to give up its nuclear and missile programs, open up to the outside world and embrace democratic reforms as Myanmar has done so far.

"As the young leader Kim Jong-un has taken the helm of his country, the North has been given a chance to change. If the country loses this opportunity, it will face a tougher situation. ... North Korea now stands at a crossroads," Lee said in the interview statement.

"Evidently unlike in the past, time is not on North Korea's side. It is about time North Korea realized that it cannot afford to run the clock out indefinitely. It should forsake its nuclear programs and decide to change. In this connection, North Korea needs to draw a lesson from Myanmar's recent changing of its course," he said.

Should North Korea opt for the path leading to genuine change, South Korea will join hands with the international community to provide assistance and collaborate to the best of its abilities for the sake of stability and progress of the North, he said.

Lee also said South Korea, the United States and China "share a common understanding on the need for genuine changes in and the opening of North Korea," and expressed hope that China's new leader Xi Jinping "will make an active and affirmative contribution to helping bring about positive changes in North Korea.

"I hope that constructive cooperation among the three nations will continue in the years to come to make sure that the North will abandon its nuclear development programs and pursue economic reforms and opening, and thus become a responsible member of the international community," he said. (Yonhap)