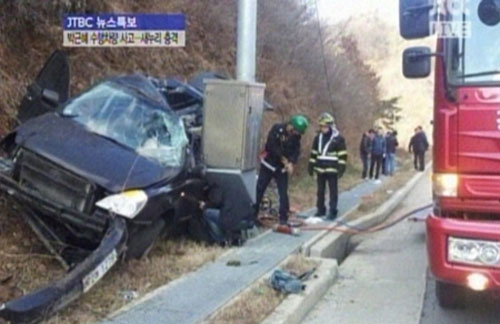 Lee Chun-sang, a longtime aide to presidential candidate Park Geun-hye, died in a car accident yesterday when his vehicle smashed into a pole in Hongcheon, Gangwon, at 12:15 p.m. on his way to a rally in Chuncheon. He was 47.

Kim Woo-dong, director of the Saenuri Party’s public relations team, was also in the vehicle with Lee and is reportedly in critical condition. Injuries sustained by four other staff members are not life-threatening.

The news rattled the Saenuri Party with less than three weeks remaining until the presidential election. Lee had worked with Park for 15 years.

The 60-year-old candidate canceled her remaining schedule for the day and visited the Hongcheon Asan Hospital, where injured staff members are being treated.

Lee’s vehicle was one of 10 cars en route to Chuncheon in Gangwon, where Park was holding a rally at a traditional market. The car was changing lanes when it lost traction and slammed into a car before sliding into the pole. Lee died on impact.

In a press briefing after the accident, the ruling party’s campaign manager, Park Jong-hee, said slippery road conditions in Hongcheon due to snowfall the previous day as well as the speed of the car - which was trying to reach the rally on time - caused the accident.

The vehicle was reportedly traveling over 100 kilometers (62 miles) per hour on a road that has a speed limit of 80 kilometers per hour.

Park headed back to Seoul after visiting the hospital. The ruling party banned campaigners from playing campaign songs and dancing yesterday and began a period of mourning.

Despite the fatal accident, Park will take part in a one-on-one televised debate with her opponent tomorrow. The deceased Lee entered the political arena as an aide to Park in 1998 when she first gained her National Assembly seat representing Dalseong County in Daegu.

He has been considered one of the four closest assistants to the presidential candidate. For the 2012 election, Lee worked for Park’s online campaign strategy that included social networking service activities.