After 582 days, sailors freed from Somalia

After 582 days, sailors freed from Somalia 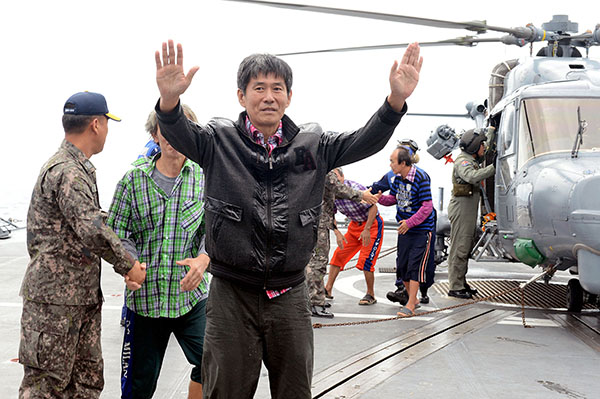 The four Korean sailors held captive by Somali pirates are rescued by a Lynx helicopter after their release on Saturday and transported to a Korean destroyer in Somali waters.[YONHAP]


Following 582 days of captivity, four Korean sailors taken hostage by Somali pirates were released Saturday and are due to arrive in Kenya today.

After the release on Saturday afternoon, the Korean crewmen of a Singaporean vessel that had been seized by Somali pirates boarded a patrolling Korean destroyer deployed in nearby waters, the Ministry of Foreign Affairs and Trade said yesterday.

The destroyer departed from the pirate-ridden Somali coast, entered international waters and is expected to arrive in Mombasa, an eastern coastal city in Kenya, this morning, where they will be greeted by officials from the Korean Embassy in Nairobi.

The freed sailors are expected to arrive in Korea as early as Wednesday via a commercial flight, if health conditions permit.

Initial medical checkups indicated that the four sailors did not appear to be suffering from any major health issues, though they have experienced weight loss and psychological trauma from 19 months of captivity, officials said.

They will undergo a more thorough medical inspection before departing from Nairobi tomorrow.

The vessel, en route from Malaysia to Kenya with 28,000 tons of palm oil, was taken by the pirates 200 miles off the coast of Kenya.

The family of the kidnapped crew members implored to the government and the United Nations to see their loved ones returned back in October. Each of the four crewmen called his family in order to convey that they were unharmed that same month.

Last December, the pirates freed the vessel and released 21 crew members - 13 from Indonesia, three from Myanmar and five from China - after the Singaporean company paid an undisclosed ransom. But the four Koreans, however, remained held captive.

The Somali pirates requested the release of five of their colleagues who had been arrested during a Korean naval raid during the hijacking of a Korean freighter by Somali pirates. They also wanted compensation for the eight pirates killed during the raid.

On January 2011, the Korean tanker MV Samho Jewelry was seized by Somali pirates in the Gulf of Aden off the southern coast of Yemen. Korea’s top court in December last year upheld decisions to sentence four of the arrested Somali pirates to 12-15 years in prison and one for life after being found guilty on charges of attempted murder, hijacking, maritime robbery and obstruction of government officials’ execution of special tasks.

In March, the Somali pirates threatened to kill one of the four crewmen and the following month released a YouTube clip of the sailors pleading for their lives. “We want to live. Please do not forget us,” they said in the video.

Officials from the Foreign Ministry on Saturday indicated that negotiations between the Singapore-based firm and Somali pirates, with the Seoul government’s cooperation, ended successfully after an unspecified amount was paid. Officials said the pirates initially requested more than $4.5 million.

The rescue mission took around three hours on Saturday. Because of tumultuous sea conditions, the original plan for Glory Ship Management to send a rescue vessel had to be nixed and a helicopter was deployed to lift the four sailors and transport them to the Korean destroyer.

After a long year and seven months, the family members of the captive sailors eagerly await the return.

Park Hyun-ae from Busan, the younger sister of the 57-year-old captain of the MT Gemini Park Hyun-yeol, said, “I cannot express in words the anxiety I have felt awaiting his return all this time. All the other family members of the kidnapped crewmen are shedding tears of joy.”

“I’ve been waiting for 582 days,” said Kim Jeong-suk, the 60-year-old wife of Lee Geon-il, 63. Lee spoke to his family over the phone yesterday. “I took a bath for the first time in two years,” he said.