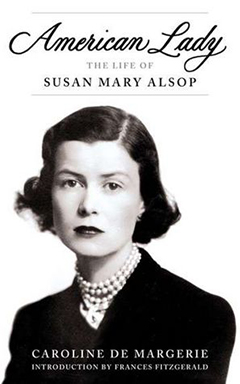 At its heart, this engaging, gentle biography is a tale of how a particular slice of the other half lived - in today’s parlance, that’s the 1 percent - in the mid-20th century. With its focus on class, events of the day and love affairs, it’s a one-woman “Downton Abbey’’ for the Yankee political class.

Dubbed an “American Lady’’ by biographer Caroline de Margerie, Susan Mary Alsop (1918-2004) certainly fits both words. She was a descendant of John Jay, a founding father and the first chief justice. Educated at the Virginia boarding school Foxcroft, she immersed herself in East Coast society and its elegant homes and parties to prepare for an adult life of privilege and security.

For a woman in the mid-1930s, that life usually meant marrying well, supporting a husband and raising children. De Margerie notes that Susan Mary Jay had too quick a mind and too much restless intelligence to be satisfied with such limits.

Her marriage in 1939 to William Patten, a Bostonian once the roommate of her friend and future husband Joseph Alsop, promised intellectual excitement. Asthma kept Patten out of World War II, but a family connection led to a posting at the American Embassy in Paris in late 1944.

Her years in Paris burnished Susan Mary’s skills as a confidante, hostess and dinner-table diplomat. She educated herself in French customs and politics, which added sheen to her already captivating personality. Thus she was well prepared for the role of Washington hostess in 1961 when, a widow not quite a year, she became Alsop’s wife at the dawn of John F. Kennedy’s Camelot. Her new husband was already one of the nation’s top political journalists. She presided at their home in tony Georgetown, hosting dinners that attracted everyone who was anyone, from Jack and Jackie on down.

The roles of diplomat’s wife and journalist’s wife appear to have suited Susan Mary far better than those of caregiver to an asthmatic husband and of mother to a son and daughter. She once told the illicit love of her life, British politician and author Duff Cooper, that she would without question choose him over her young children if faced with a choice. She seemed to have plenty of time for a rendezvous with Cooper or his successor, another literature-loving British diplomat, while Patten quietly counted down the years to a premature death.