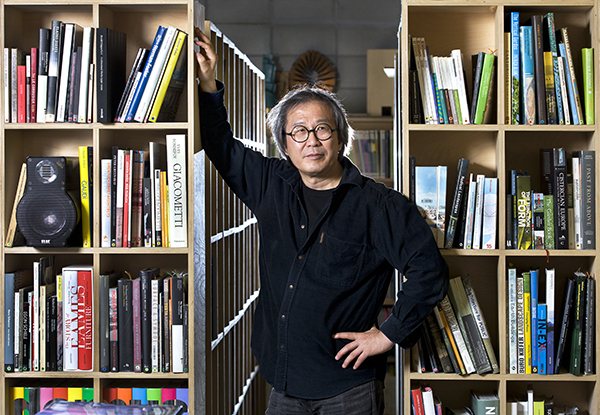 Seung H-Sang believes only a good thinker with insights in history, literature and social issues can be a good architect. His collection of 10,000 books covers a vast number of subject areas. By Park Sang-moon

Seung H-Sang has been promoting “poverty” for the past 20 years.

He’s not saying that people should starve, rather that “architecture” should let go of excessive, showy extravagance and techniques to become more compatible with both humankind and nature.

Seung, who wrote “Beauty of Poverty” in 1996, is an internationally-recognized, award-winning Korean architect and undoubtedly one of the country’s best.

Born in 1952 to Christian parents who fled to the southern port city of Busan from North Pyongan Province in North Korea, Seung wanted to be a theologian or painter. But he ended up studying architecture at the recommendation of his sister and had the opportunity to work for legendary Korean architect Kim Swoo-geun (1931-1986).

Seung says one of the biggest lessons he learned from Kim is that “architecture is not about structures, but really about space.

“Kim was the first in Korea to promote such a concept - that the exterior of a building is just to cover up the space inside, and it is the space inside that’s the most important.”

Seung certainly considers that what’s inside the building matters the most - the people. He is a strong believer in what Winston Churchill said: “We shape our buildings, thereafter they shape us.”

He claims that a modest, ethically built house makes an upright and honest man, while sumptuous and pretentious architecture leaves more room for vanity and untruthfulness.

In line with his “Beauty of Poverty” philosophy, his architecture is more about “emptying” than “filling.” He was deeply moved by Looshaus in Vienna, which shocked Vienna’s citizens when it was built in 1911 for its outright rejection of ornamentation.

And in his work, he seeks to achieve the beauty seen in hanok, traditional Korean households, which had madang, or a yard, a place that’s constantly re-created and reinterpreted as a banquet hall when there was a village ceremony, a living room when families gathered and so on. He describes the madang as exactly what the international architectural world is calling for today: “indeterminate emptiness.”

Seung believes architecture is neither engineering nor art, but grounded in the humanities, as only a good thinker who is familiar with history, literature and social issues can be a good architect. No wonder his workspace on the first floor of a five-story structure called Iroje in the Daehangno area is filled with 10,000 books on all sorts of topics. The structure houses his workspace, architecture company (of the same name), a gym where he practices kendo and a residence for his family.

Iroje roughly translates as “the house where [people] walk on dew,” coming from an old Chinese anecdote about a poor yet filial scholar who visited his ill parents every morning, walking on dew.

The Korea JoongAng Daily sat down with Seung last week to talk about his latest book, “Everything Old Is Beautiful,” and more.


Q. How does this building - Iroje - embody your philosophy that architecture should embrace people, help people remember their past and incorporate a creative and versatile space such as a yard?

A. There are no doors inside except doors leading to outside and doors at the toilet.

Anybody here can come to my workspace without knocking on the door or asking for permission, for instance, and take a book or CD. I envisioned a place where anybody can live, enjoy and share things.

I always dreamed of a healthy community. These days, people are more alone than ever. With advanced information technology and virtual reality, they don’t even know who is living next door.

I guess it has to do with the place I was born, which occupies a special part in my memory - a village in Busan where eight households who fled the North lived together in a crammed place, sharing a well, bathroom and madang.

I also got deeply inspired from Fez, the 1,200-year-old Moroccan city where the houses look like beehives, and they all have similar dimensions. About 10 houses make up one unit and they all share a well, an oven and other facilities. It’s very fair, democratic and nonhierarchical.

Iroje doesn’t have a madang. But there was a paulownia tree that was 50 to 60 years old when we started building this. We wanted to preserve it so we even designed our building in a way to go around it. But the workers who weren’t aware of our intention ended up cutting it off.

So we built a little yard and planted bamboo trees. It’s our monument to remember the paulownia tree.


What did you want to talk about in your latest book? Is it “indeterminate emptiness”?

The global architecture community is now talking about “indeterminate emptiness.”

This is after the community talked enough about aesthetics and landmarks. Building a beautifully designed structure or a landmark is bound to come with competition and conflict. Also, it has quite a lot to do with hierarchies and classes.

But things changed, particularly after the Sept. 11 terrorist attack on the World Trade Center, which was a landmark that symbolized New York. Some architects learned that landmarks can end up vain and hollow, and instead called for “less aesthetics, more ethics.”

This is interesting because indeterminate emptiness is actually what defines traditional Korean architecture. The sad thing is that as Korea accepted modern ideas, it abolished its traditional buildings and replaced them with Western ones.

Western houses named each room after its function: Living room, bedroom, bathroom and so on. But in Korean houses, each room was named for its location: anppang for inner room, dwikkan for back space, referring to the bathroom often built in the back of the house, sarangchae for unit outside the hallway, referring to a guest room often built near the gate.

If you put a table and dine, it becomes a living room. If you place a mat and sleep, it becomes a bedroom. If you hold a ritual there, it becomes a shrine. Activities that take place were the most important factor. And the space remained empty and silent, leaving much room for re-creation and reintepretation.

Also, if you look at daecheongmaru [traditional open-air spaces where people enjoyed unobstructed natural views and wind as well as easy access to front and rear gardens], it’s hard to tell if it’s the inside of the building or the outside. So architecture here is not in itself an object, but a vehicle that connects people with nature.

Subaekdang in Namyangju, Gyeonggi, is one of the houses that best represent Seung’s philosophies. Built in 1998, it’s made of various structures and yards that together create a world apart, yet is in harmony with the surroundings. The name means “the house that keeps white” or “the house that keeps emptiness.” By Osamu Murai


Doesn’t other Asian countries’ architecture come with yards, too? How is the Korean yard different?

And Chinese architecture is often all about hierarchies, and so are the yards. If you look at yards in siheyuan [a historical type of residence that was commonly found throughout China, most famously in Beijing], there is a road in the center on which only certain people can walk.

Middle Eastern architecture also came with yards, but they were either used to give [shelter from] sunshine or wind, or express beauty.

Few countries had a concept like the Korean madang, which is just plain empty, allowing people to deliberate, and ready to be filled with ideas.

What are you working on these days? Also, what’s the latest with the envisioned Yongsan Park project that Iroje and a Dutch landscaping firm called West 8 are working on?

Currently, I am working on various projects in China. My China office has six employees and opened in 2000. We are working on a project in a village in Jingdezhen [also known as the “Porcelain Capital” because it has been producing quality pottery for 1,700 years], a resort in Hainan and another project in Huangshan. I’m also involved in projects in the United States, Malaysia and the Middle East.

As for the Yongsan Park project, we’ve recently inked the deal [with the Korean government]. Because of the presence of U.S. military there, inspections have been limited. My guess is that the environment in the area is quite damaged and the U.S. military wants to hide it or restore it, although I am not sure if it’s possible.

[Iroje and West 8 have chosen “Healing” as the theme of the Yongsan National Park, with hopes to restore some of the topography in the park that had been altered through the years and retain the painful history of the place. Yongsan used to be a residential area for the Japanese during the latter part of 1392-1910 Joseon Dynasty and served as barracks for the Japanese military during the Japanese colonization (1910-1945). It then became the military base for the U.S. Army after Korea’s liberation.]

Lastly, we all have comfort food. Though not all of us has comfort “space,” architects might. What is your comfort space?

When I have concerns, I go to Jongmyo [the ancestral shrine in central Seoul]. If you go there around 4 p.m., usually there is no one there.

I stand in front of woldae, which is more than 90 meters (295 feet) wide. [Woldae is the stone courtyard in front of the main hall in Jongmyo and other Korean palaces.] There you feel absolute solitude.

In a structure in Jongmyo, there are tablets for the deceased kings and queens of Joseon, and even today Koreans hold ritual ceremonies that began in the 14th century.

I feel like it’s the very original form of my architectural philosophies that put more importance on emptying.