Trailblazing chef takes a look back in latest book

Trailblazing chef takes a look back in latest book 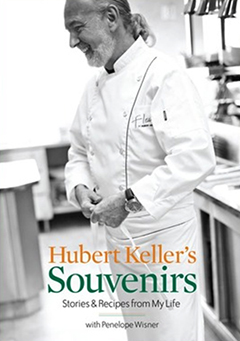 Souvenirs: Memories, Stories and Recipes from My Life


Chef, restaurateur and television personality Hubert Keller is known for his modern approach to French cuisine, but in his third book he casts a backward glance over his peripatetic culinary history.

The 120 recipes in “Souvenirs: Memories, Stories and Recipes from My Life” trace Keller’s journey from his Alsatian childhood, through his haute cuisine training in France, to his innovative restaurants in San Francisco, Las Vegas and St. Louis.

“Almost every recipe has a story,” said Keller, 58, who is a James Beard award-winner and a familiar television presence on cooking shows.

Q. Why did you write this book?

A. To retrace my career, starting with the foundation. It’s about myself, where I grew up, how I became a chef and the different stages I went through.

Did you always want to be a chef?

I started at 16. In France you usually start at 14, so I had a late start. My parents had a pastry shop and we grew up living above it. The whole house was filled with the smell of the croissants baking downstairs so I wanted to be a pastry chef, that’s natural. When you live in the neighborhood of a baker you smell the bread.

Why is your cuisine considered modern French?

Even 15 or 20 years ago French cuisine still had that cloud as rich cuisine, fatty cuisine, not healthy. I started introducing a lighter version. I developed techniques to bind sauces with vegetable purees to cut the calories. The New York Times called me “the rebel with a Cuisinart.”

How do your restaurants reflect this spirit?

You always try to be up on what’s really happening. At Fleur in [Las] Vegas, I introduced nitrogen [tableside to make frozen drinks and ice cream] and when absinthe came out again I introduced that, because it’s also about the wine and the cocktails. We always have to be ahead of the game.

How did Burger Bar come about?

I was the first one with a chef’s name to put his name on a burger restaurant. It was risky because at that time in our industry they said if you were a loser you’d just go and flip burgers. But it was based on how I would operate Fleur de Lys, which is the upscale restaurant in San Francisco: choosing the best bread, the best vegetables, even putting in a butcher shop where we would grind everything fresh.

What is your philosophy of food and cooking?

Quality and consistency: choosing the right ingredients and always giving them the best, from Fleur de Lys to the concept of Burger Bar. Even [at] Fleur, which is more of a tasting menu, we’re really working those details.

Are the recipes in this book appropriate for the home cook?

Most of the recipes are pretty approachable with ingredients available in a fine grocery store or farmers market.

Can you share any tips on how a home cook can enliven a dish?

Flavored oils are very easy to do but they can change your way of cooking. Make paprika oil, or vanilla oil, put them in your refrigerator. Then if you’re making, say, a chicken dish, drizzle on a little oil at the last moment. There’s an explosion of flavor. Also, get dried mushrooms: porcini or morels or shitake. They’re expensive, but when you soak them you get a lot for your money. Add three or four to sauce, broth or stew, and you’ll see it completely changes the flavor.