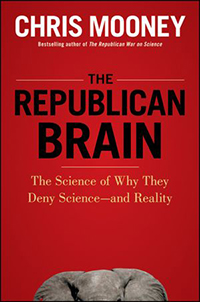 The Republican Brain: The Science of Why They Deny Science - and Reality

Chris Mooney is one of the few journalists in the country who specialize in the now dangerous intersection of science and politics. His book is a well-researched, closely argued and amply referenced indictment of the right wing’s assault on science and scientists. In almost every instance, Republican leaders have branded the scientific mainstream as purveyors of “junk science” and dubbed an extremist viewpoint - always at the end of the spectrum favoring big business or the religious Right - “sound science.” Rightists argue that the consensus itself is flawed. Then they encourage a debate between the consensus and the extremist naysayers, giving the two apparently equal weight. Thus, Mooney argues, it seems reasonable to split the difference or simply to argue that there is too much uncertainty to, say, ban a suspect chemical or fund a controversial form of research. 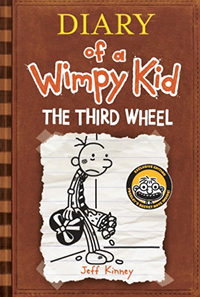 The Third Wheel (Diary of a Wimpy Kid, Book 7)

Love is in the air - but what does that mean for Greg Heffley?

A Valentine’s Day dance at Greg’s middle school has turned his world upside down. As Greg scrambles to find a date, he’s worried he’ll be left out in the cold on the big night. His best friend, Rowley, doesn’t have any prospects either, but that’s a small consolation.

An unexpected twist gives Greg a partner for the dance and leaves Rowley the odd man out. But a lot can happen in one night, and in the end, you never know who’s going to be lucky in love. 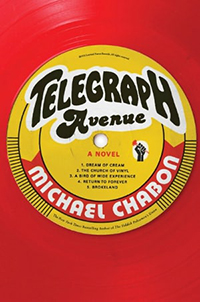 As the summer of 2004 draws to a close, Archy Stallings and Nat Jaffe are still hanging in there - longtime friends, bandmates and co-regents of Brokeland Records, a kingdom of used vinyl located in the borderlands of Berkeley and Oakland. Their wives, Gwen Shanks and Aviva Roth-Jaffe, are the Berkeley Birth Partners, a pair of semi-legendary midwives who have welcomed, between them, more than a thousand newly minted citizens into the dented utopia at whose heart - half tavern, half temple - stands Brokeland Records.

When ex-NFL quarterback Gibson Goode, the fifth-richest black man in the United States, announces plans to build his latest Dogpile megastore on a nearby stretch of Telegraph Avenue, Nat and Archy fear it means certain doom for their vulnerable little enterprise. Meanwhile, Aviva and Gwen also find themselves caught up in a battle for their professional existence, one that tests the limits of their friendship.

Adding another layer of complication to the couples’ already tangled lives is the surprise appearance of Titus Joyner, the teenage son Archy has never acknowledged and the love of 15-year-old Julius Jaffe’s life.