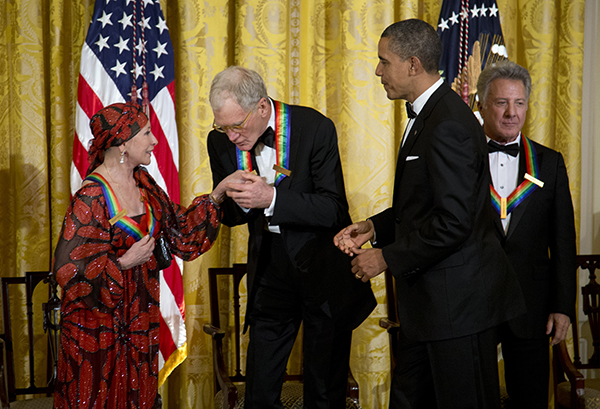 WASHINGTON - Led Zeppelin, Dustin Hoffman and David Letterman were among seven performers honored for their lifetime contribution to U.S. culture at a glittering awards ceremony late Sunday that is the climax of Washington’s social calendar.

While Led Zeppelin was honored as a band, keyboardist/bassist John Paul Jones, guitarist Jimmy Page and singer Robert Plant each received their medallions.

“With their extraordinary talent, creativity and tenacity, the seven 2012 Kennedy Center honorees have contributed significantly to the cultural life of our nation and the world,” said Kennedy Center Chairman David Rubenstein.

The annual honors gala, which has become the highlight of the Washington cultural year, was attended by President Barack Obama, the first lady, Michelle Obama, and other Washington and Hollywood dignitaries.

Earlier, the honorees were received at the White House by the president and first lady, who praised the center’s tradition of providing support to leading cultural figures around the world.

In his remarks, Obama called it “a remarkable evening.”

“And it speaks to something that has always made this country great - the idea that here in America, more than any other place on Earth, we are free to follow our own passions, explore our own gifts, wherever they may lead us,” he said. “And people from all around the world come here to make sure that they too can provide us the incredible gifts that they have.”

He told the story of Buddy Guy, who grew up in a poor sharecropper family in Louisiana and made his first guitar out of wires from a window screen.

The president went on to recall that when Dustin Hoffman auditioned for a part in “The Graduate”, a crew member handed him a subway token on his way out, saying, “here, kid, you’re gonna need this.”

But Dustin, Obama pointed out, ended up getting the role and “it launched one of the greatest movie careers of his generation, of any generation.”

The president noted that when Natalia Makarova defected from the Soviet Union in 1970, her name was excised from Soviet textbooks and her countrymen were forced to rely on underground channels “to follow the rise of one of the most accomplished ballerinas in the world.”

“And tonight we honor Led Zeppelin for making us all feel young, and for showing us that some guys who are not completely youthful can still rock,” he added.