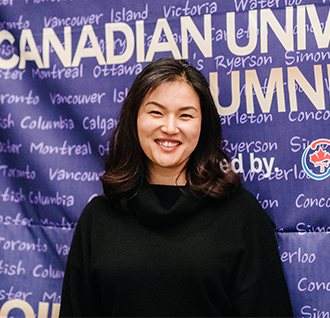 Ahead of the 50th anniversary of diplomatic ties between Canada and Korea next year, the new head of the Canadian Chamber of Commerce (CanCham) expected to see increased trade and cultural exchanges alongside progress toward a bilateral free trade agreement.

“As a Canadian professional working in Korea, I found I lacked the sense of community I took for granted in Canada,” said Genny Kim, CanCham chairwoman and a senior foreign attorney with Shin & Kim, during an interview with the Korea JoongAng Daily last week. Kim, who is from Vancouver and a graduate of the University of British Columbia, has been a member of CanCham since 2000 and a director since 2007.

CanCham is a nonprofit organization that promotes bilateral trade and the Canadian business community in Korea with 100 corporate and individual members, both Canadian and non-Canadian. Kim is the second woman chairperson of the chamber.

“I was, I am, a minority among minorities in Korea. And CanCham, to me, is more than just a vehicle to bring Canadian and Korean commercial interests together - it’s about building community among Canadians in Korea,” she said. “I think many of us feel like we are somewhat on our own here because we are scattered here and there over so many different industry sectors.” She added the chamber membership includes representatives of small and medium enterprises as well as large corporations, senior executives, entrepreneurs, professionals, teachers and students.

On Nov. 22, CanCham held its 3rd Canadian University Alumni Night at the Canadian Embassy in central Seoul, drawing more than 120 alumni from 25 schools.

Over the past year, the chamber organized business luncheons, social networking events and an information session on Korea’s presidential election, and hosted Joe Oliver, Canada’s minister of energy and natural resources.

Korea continues to invest heavily in Canada’s energy and natural resources industry, added Kim. In addition to a thriving cultural and educational relationship, bilateral trade was $12 billion in 2011.

“But many people wish there was a free trade agreement between our two countries, and we certainly support that,” said Kim. “We think it would be beneficial to businesses at all levels.

“Canada and Korea are middle powers with common agendas. There is potential for greater cooperation in areas of mutual interest: development assistance, regional security, nuclear proliferation and stability of the international economy, to name a few.”

While Kim has been acting chairman of CanCham since August, she will be officially inaugurated tomorrow at the chamber’s annual general meeting, where the board will discuss next year’s agenda. Kim is especially keen on reviving a women’s leader seminar, another way to connect with the Korean community. Kim is confident about the future of the Canada-Korea relationship no matter who wins the upcoming presidential election.

“As a chamber, CanCham hopes that the next government will promote policies conducive to business and committed to economic stability and to the successful conclusion of the Korea free trade agreement,” added Kim. “Its time has come.”