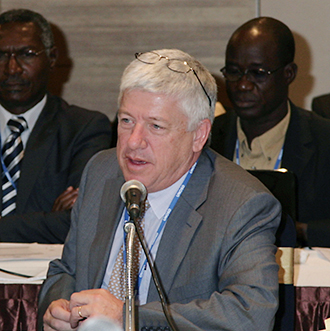 Though Korea is in a leading position in the area of green technology, it should work more on implementing policies that promote green growth, said Mark Halle, vice president at the Canada-based International Institute for Sustainable Development.

“Korea has emerged as a leader in promoting green growth and is clearly determined to secure a position in the world as the home for international activity devoted to this,” Halle said in a recent e-mail interview with the Korea JoongAng Daily.

“Korea’s lead is most apparent in the area of technology, and is much weaker on the policy side,” he said. “I hope that Korea will seek to better balance its approach in the future.”

Halle was in town last month to attend a three-day workshop in Songdo, Incheon, organized by the United Nations Office for Sustainable Development (UNOSD).

Some 80 attendees from all around the world in different sectors participated in the workshop and shared experiences of what works and what doesn’t in the framework of sustainable development.

The workshop was timely, as the Korea-initiated Global Green Growth Institute was recently officially transformed into an international organization and because the country also won the bid to host the Green Climate Fund in Songdo.


Q. Korea has been a leading nation in terms of promoting green growth. How will Korea be able to contribute to building the capacities of developing countries in sustainable development?

A. Korea has moved vigorously to promote an approach based on green growth, both by setting an example at home and by developing institutions - such as the Global Green Growth Institute and the UNOSD - that can help other countries move along this path. Both of these institutions, and others, are focused on providing assistance to developing countries to make the transition to a green economy.

What are some of the achievements made by Korea?

Korea has a string of impressive achievements at the domestic level, and impressed the world by basing the stimulus package on green development. It has also made a mark by becoming the global champion of green growth around the planet. The world now expects a good deal from Korea, both in terms of moving beyond a green technology approach to a broader green policy-based approach, but also to go further at home, for example, by giving less stress to engineering and more to biodiversity conservation.

Based on your experience, what are the most successful cases or countries where sustainable development progress has been made or is progressing?

Perhaps the best example is Bhutan, where development has been based much more on qualitative than quantitative measures and where the national approach is very much values-based. Bhutan measures progress not in terms of gross domestic product but in terms of “national happiness.” This is an approach that is not easily replicable, but it shows that not all development must be based on the aggressive promotion of green technology.

What are the most unsuccessful cases when implementing sustainable development measures?

It is incorrect to point fingers, since each country is stuck in its own reality. But it is clear that the countries most bound to dirty forms of conventional energy and those most resistant to addressing sustainable development make the least progress.