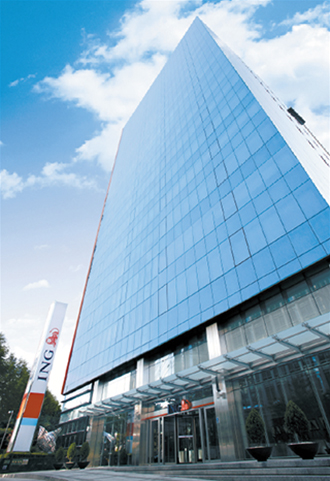 The decision is expected be determined tomorrow when Euh Yoon-dae, chairman of KB Financial Group, heads a temporary board of directors’ meeting.

“Euh is likely to formally submit the matter during the meeting seeking directors’ agreement as he wants to diversify KB Financial Group’s sources of revenue,” said an industry source. “Euh originally requested holding the meeting end of November but it has been delayed due to conflicting schedules of outside directors. The meeting will take place after KB Financial Group ends its scheduled strategic meeting on Dec. 5 [tomorrow].”

Euh has been spearheading the move to acquire the Korean insurance unit of Dutch banking giant ING Group to enhance its nonbanking portfolio. Currently, more than 90 percent of KB Financial Group’s revenue is covered by its flagship KB Kookmin Bank.

The chances of Korea’s No. 2 banking group taking control of the nation’s No. 4 player have been cloudy due to strong opposition by some outside directors, who believe next year’s grim economic outlook will undermine profitability in the insurance sector due to low interest rates. They also argue the acquisition is too costly.

“We’re making a last-ditch effort to persuade some outside directors who are against the deal so that it can be approved unanimously without having to put the matter to a vote,” said an employee at KB Financial Group. 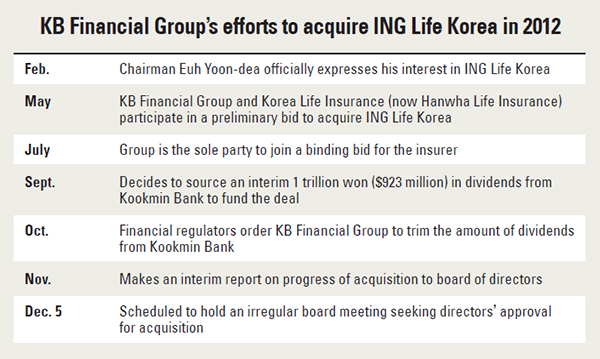 When the matter is eventually put to a vote, at least seven votes supporting the deal will be required for final approval.

To persuade outside directors, Euh went on a business trip accompanying seven out of nine of the outside board directors to Beijing on Nov. 20 to celebrate the opening of Kookmin Bank’s first local subsidiary in China. But Lee Kyung-jae, chairman of the board and Kim Young-jin, a member of the board and also professor of business at Seoul National University, who both strongly oppose the deal, were absent, indicating that the fate of the move is far from certain.

In Beijing, outside directors and Euh exchanged opinions about the purchase. KB Financial was named as a preferred bidder to acquire ING Life Korea in September. It originally aimed to complete the process by the end of that month before progress stalled.

A demand to guarantee the continued employment of the company’s work force by its labor union’s remains another hurdle for a successful takeover.

“Insurance firms will be restructured from next year,” said a senior official at the Financial Supervisory Service. “Some may close down or merge with other firms.”

Industry insiders say Euh will likely report at tomorrow’s board of directors’ meeting that the purchase price of ING Life Korea is estimated to be between 2.42 trillion won ($2.23 billion) and 2.43 trillion won, lower than the 2.45 trillion won forecast by the media.

To finance this, KB Financial group decided to source an interim 500 billion won in dividends from Kookmin Bank, scaling back from the original 1 trillion won after financial regulators deemed the amount excessive.

It aims to secure 1.5 trillion won by issuing corporate bonds.

The ING deal remains an attractive option for KB Financial Group as the company remains in sound health financially.

Dutch banking giant ING Group put its Asian insurance and asset management operations up for sale because it was ordered by the European Commission to sell its global insurance arm in return for the state aid it received during the 2008 financial crisis.

Currently, KB Financial Group has No. 15 player KB Life Insurance under its wing.

“KB Financial is known to be working on the final touches for the deal, prior to approval of the board of directors,” said Sung Byung-soo, an analyst at Tongyang Securities.

“ING Life Korea’s net profit of about 200 billion won per annum as positive, and long-term, the acquisition should provide the foundations for balanced growth in nonbanking operations, which KB Financial Group needs to strengthen to offset tepid growth in its banking operations.”