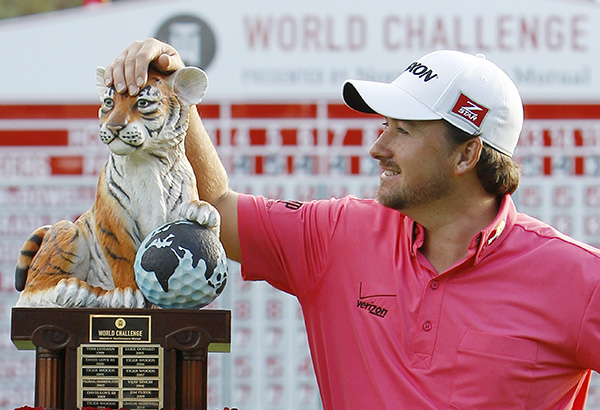 
THOUSAND OAKS, Calif. - Graeme McDowell kept trying to convince himself and everyone else that his game was improving, even though he had gone two years without a trophy to prove it.

That’s what made Sunday at Sherwood so sweet.

With a pair of superb short-game shots on the back nine, McDowell closed with a four-under 68 to win the World Challenge by three shots over Keegan Bradley, allowing him to head home for a 10-week break with a shot of confidence.

“It’s been too long. It’s been a hell of a two years since I sat here as a winner,” McDowell said. “We all put winning up on a pedestal as the ultimate goal. We like to say that it’s all about the process and going through the motions and trying to get better. But let’s be honest. We all measure ourselves by the win. I can say that now.”

The three-shot margin made it look easier than it was.

Sherwood was playing longer than ever in a light rain, giving an advantage to a big hitter like Bradley, not to mention tournament host Tiger Woods. Even when McDowell built a four-shot lead through 11 holes, a careless three-putt bogey on the 13th brought Bradley within two shots with five holes to play.

McDowell responded with a 75-foot putt that he lagged to tap-in range, a key moment for someone coming off a three-putt bogey. From a precarious spot behind the 17th green, he had to land his chip in the rough and hope it would hop onto the fringe and not run to far by the hole. He pulled it off perfectly.

He made one last birdie he didn’t need, extending his dominance at Sherwood. It was the 10th time in 12 rounds at Sherwood that McDowell has shot in the 60s, and he now has two wins and a runner-up finish in his three trips to the World Challenge.

“This really caps off my season,” McDowell said. “We try not to put winning on a pedestal, but this one feels very sweet because it’s been a grind all year.”

McDowell won for the first time since he beat Woods in a playoff at Sherwood to close out a dream season in 2010 that included his first major at the U.S. Open and the winning point for Europe at the Ryder Cup.

This win followed a year of frustration. He played in the final group of the U.S. Open and British Open but came up short, and he lost some enthusiasm going into tournaments late in the year. He talked all week about a 10-week break, some of it in Northern Ireland and the rest in Orlando, Fla., where he just built a new house and he’s opening a tavern outside the gates of Lake Nona.

Bradley, who was within one shot after a birdie on the fifth hole, closed with a 69. Bo Van Pelt had a 70 to finish third. Woods, the tournament host and five-time champion, was never in the picture. He didn’t make birdie until the 13th hole and shot 71 to tie for fourth.

“Graeme really likes this place,” Bradley said. “Just when I thought maybe I’d have a good chance, he’d hole a putt or hit a chip like he did on 17. He’s a champion. I don’t expect anything less out of him.”

McDowell finished on 17-under 271 and earned $1 million against the 18-man field.

A light rain fell for much of the round, as it has all week, making Sherwood play so long that McDowell had to hit a 5-wood into the par-4 fourth hole, and a 4-iron for his third shot in the par-5 fifth. His only bogey over the final 47 holes of the tournament came on the 13th hole.