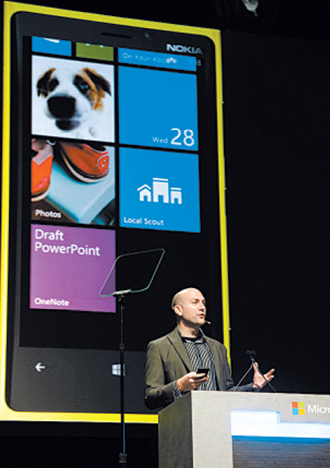 When Tommie Johansson was looking for a new smartphone in Stockholm last month, he quickly ruled out the iPhone 5. The reason: It’s too slow.

The Apple handset can’t connect to the newest networks of most European carriers. That creates a potential opening for Nokia as it seeks to claw back lost market share with new phones that can take full advantage of the fastest networks.

Nokia is vying with Apple and Samsung Electronics for European shoppers’ holiday budgets and an early foothold in the market for LTE smartphones, which are faster and often have bigger screens. For Nokia, facing falling revenue and mounting losses, winning over customers like Johansson would help it regain traction in a market dominated by Apple and phones using Google’s Android software.

“A fast Internet connection is a must so I knew I wanted a 4G phone,” said Johansson, 41-year-old software developer in Stockholm. Nokia’s top-of-the-line Lumia 920 “was the one.”

LTE, or long-term evolution, is a wireless technology allowing quicker Web browsing, song downloads and video streaming. While the iPhone 5 can connect to the LTE networks of the biggest U.S. carriers, it can’t do so in Europe because most operators there provide LTE service on a different frequency.

The fast LTE connection and Microsoft’s new Windows Phone 8 software are among the features Nokia is touting as it tries to lure back consumers who defected over the past five years. Apple and Android now control almost 90 percent of the European smartphone market, according to Strategy Analytics. Nokia, which once dominated global smartphone sales, competes for the rest with BlackBerry-maker Research In Motion and a handful of other also-rans.

“The Lumia’s LTE connect-ability is going to help Nokia stand out to holiday shoppers,” said Johan Eidhagen, general manager of Nokia in Scandinavia.

Nokia shares have risen 21 percent in the past two weeks amid reports the Lumia 920 sold out in German stores soon after its debut, signaling good demand. The stock is still down almost 90 percent since the first iPhone was introduced five years ago.

“There is clearly strong demand among European consumers for 4G phones,” said Neil Mawston, an analyst at Strategy Analytics in London. He predicts Nokia will sell 5 million Lumias in the fourth quarter, up from 2.9 million in the previous three months.

Nokia’s Lumia 920 and Lumia 820 allow users to access the about two dozen LTE mobile networks in western Europe, according to Strategy Analytics. The iPhone 5 only works on the LTE network of two carriers - Deutsche Telekom in Germany and EE, a U.K. venture of Deutsche Telekom and France Telecom.

Apple may have prioritized the U.S. in its design because LTE networks there offer broader coverage and there are more potential customers than in Europe, Mawston said. The company hasn’t announced plans to update the iPhone 5 with more frequencies and officials of the Cupertino, California-based company declined to comment.

The U.S. focus means Apple is losing some early LTE adopters in an important market. Western Europe’s smartphone shipments reached 28.1 million units last quarter, versus 26.7 million in the U.S., according to the market researcher.

“There’s more skepticism around Apple now since their new phone doesn’t work with LTE,” said Filip Ljuboje, a salesman at a mobile-phone store in Stockholm. “The 3G net is congested from so many users, so moving to LTE is a priority.”

The speed advantage over the iPhone alone won’t be enough to revive Nokia. The company, based in Espoo, Finland, also needs to lure customers away from rivals such as Samsung, which doesn’t have an LTE speed handicap.

Samsung makes handsets running the Android operating system and has become the biggest maker of smartphones. It also sees LTE as a key part of its strategy, and its Galaxy S3 and Note 2 work on European LTE networks.

“There is definitely the possibility of a boost for us,” said Martin Cullberg, director of Samsung’s telecom business for the Nordic region. “The focus right now is to show the benefit you get by using LTE that supports all available frequencies.”

Samsung’s “strong momentum” and consumer satisfaction with Apple and Android are among the key hurdles for any smartphone recovery for Nokia, according to Kai Korschelt, a Deutsche Bank AG analyst in London. German stores may have run out of new Lumia phones because of limited supply rather than overwhelming demand, Korschelt wrote in a note to clients last week.

“It seems that the initial interest and purchases are mainly from loyal Nokia users and electronics enthusiasts,” said Korschelt, who advises selling the company’s shares. “We continue to see limited consumer traction for Nokia’s Windows 8 devices in a highly competitive and duopolistic smartphone market.”