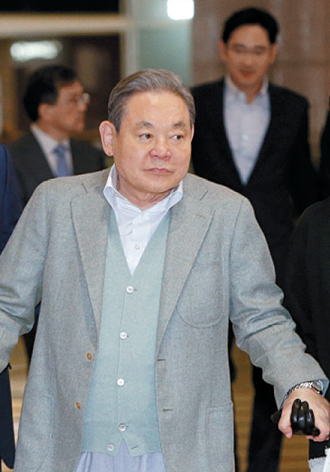 Samsung Chairman Lee Kun-hee leaves Gimpo International Airport yesterday morning for Hawaii, where he is expected to spend the rest of the month. His first son and Samsung Electronics COO Jay Y. Lee, shown in the background, joined a few other executives in sending him off. [YONHAP]

Speculation is rife that Samsung will carry out an executive-level reshuffle as early as today - with particular attention being paid to whether Chairman Lee Kun-hee’s only son Jay Y. Lee will be promoted to vice chairman of the nation’s biggest conglomerate. He currently serves as Samsung Electronics’ president and COO.

High-level reshuffles traditionally follow Samsung’s annual awards ceremony, which took place last Friday. Samsung confirmed that the chairman has approved the shake-up, but would not provide any details.

Heir-apparent Jay Y. Lee looks set to assume the vice chairmanship given that he has climbed one rung up the corporate ladder every one to two years lately. The 44-year-old became executive director in 2007, vice president in 2009 and president in December 2010.

Since late last year, he has been appearing more often in public, either on business trips and important meetings overseas alone or with his father.

Boo-jin, the chairman’s eldest daughter who also serves as the CEO of Hotel Shilla, and Seo-hyun, the second daughter and executive vice president of Cheil Industries, may also get promoted, sources claim.

For executives outside the Samsung family tree, debate is growing about whether a new face will fill the vice chairman’s post at the finished goods division, which has remained empty for the last six months. The tech bellwether is run by two vice chairmen who are responsible for separate divisions - completed products, and parts and components.

One year ago, Samsung promoted Kwon Oh-hyun from president of its chip and display unit to a vice chairman overseeing parts and components. But the second vice chairman’s position has remained empty since Choi Gee-sung was upgraded to head of the group’s corporate strategy office, a de facto control tower, in June.

Chairman Lee left for Hawaii yesterday morning on his own plane from Gimpo International Airport with his wife. This is the seventh overseas trip the 70-year-old leader has made this year.

He is expected to unveil an important new business plan during his New Year address early next month. Next year will mark the 20th year since his famous “Frankfurt declaration,” in which he ordered Samsung staff to “change everything” but their “wives and children” in a major management overhaul.