iPhone users may have no access to civil servants’ app

iPhone users may have no access to civil servants’ app 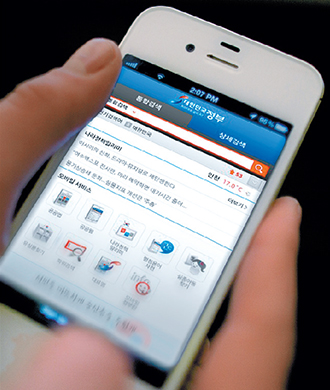 The government is set to unveil a smartphone app for public servants in March, but iPhone users may not be able to take advantage of it. [JoongAng Ilbo]

The government is building an application for smartphones and tablet PCs to make working life easier for the nation’s nearly 1 million public servants. It is scheduled to be launched March 12.

The service has many functions, from enabling employees to look up phone directories under the government umbrella to making it possible to search and view confidential information such as individuals’ resident registration numbers, family relations or land registers. The latter requires a higher level of security clearance.

But iPhone and iPad users may be forced to switch to Android platform-enabled mobile devices if they wish to use the service as Apple Korea has refused to comply with National Intelligence Service (NIS) requirements.

The agency, Korea’s equivalent to the U.S. Federal Bureau of Investigation, is responsible for verifying the security level of smartphones and their platforms.

The Ministry of Public Administration and Security said it asked the NIS late last year to review the security level of smartphones and tablet PCs on the market as part of its preparations for developing the new service.

Following the review, the NIS asked mobile device manufacturers like Samsung Electronics, LG Electronics, Pantech and Apple to meet security-level requirements including source code disclosures as a prerequisite for participating in the development and installation of the electronic system.

The manufacturers have also been asked to install a government-developed mobile device management solution, which automatically blocks data leakages in emergencies - such as in the event that a phone is lost or stolen - and mobile gadget software to prevent hacking. Apple is the only one not to have signed an MOU with the ministry pledging its cooperation.

Apple’s local subsidiary rejected the spy agency’s request on the basis of it representing unwanted meddling, inside sources say.

“What the NIS and Korean government are trying to do is meddle with Apple’s own system,” said an Apple Korea insider, who asked not to be identified. “But Apple is equipped with the one and only door to its iOS system - iTunes - in the interest of tight security and to protect itself. That’s why Apple has gained a reputation for stable security. Look at Android. It has about 100 doors. It’s impossible for Apple to hand the key to the door over to the Korean government.”

Unlike Google, which offers the open-source Android platform and saw its global market share reach 75 percent in the third quarter, according to analyst firm IDC, Apple makes it a rule not to reveal the source code of its iOS platform.

An official at the ministry’s future informatization department admitted that Apple Korea has refused to accept the NIS offer, but said talks are not over. “It’s true that iPhone users only make up a fairly small share of the Korean market, but the NIS and our ministry will keep contacting Apple Korea to pursue further negotiations on the matter.”

According to the ministry, the electronic government application is being customized for different ministries and their subunits, depending on their job responsibilities. It is currently in trial operation among a minor portion of government workers and runs on 11 devices - including Samsung’s Galaxy S smartphone series, Galaxy Tab tablet PCs, LG’s Optimus smartphones and Pantech’s Vega Racer smartphones.

The ministry is also going to make it mandatory for public servants using the service to install only those applications approved by the ministry, so that their devices can prevent viruses and hacker attacks. The ministry is currently drawing up a list of allowed apps.

Public servants in both central and local governments in Korea total around 987,000. Although it is not known how many use iPhones, Korea has an estimated 3 million iPhone users and 1 million iPad users.

“It’s hard to side with either Apple or the government [on this matter] as they both have guidelines that are hard to compromise on,” said Baik Jun-bong, director of Digieco, a research institute under the mobile carrier KT.

“Apple is notorious for sticking to its own regulations and principles worldwide. It has made some changes for China, its most important market outside the U.S., but that is the exception, and also it didn’t involve any security issues.”

Yoo Dong-hoon, chief of a research institute under INetCop Corporation, an Internet security solution provider, says the iOS’ security system not as flawless as people think.

“It’s true that Android is more prone to attacks from viruses, malware and hackers,” he said, “But that doesn’t mean Apple is invincible. Users of iOS have fallen victim to security attacks in foreign countries. Should any incident involving Korean users happen, Apple won’t be able to respond to the government in the same [way] as we’re seeing now.”