Ahn insists he’ll stay in politics for the long run

Ahn insists he’ll stay in politics for the long run 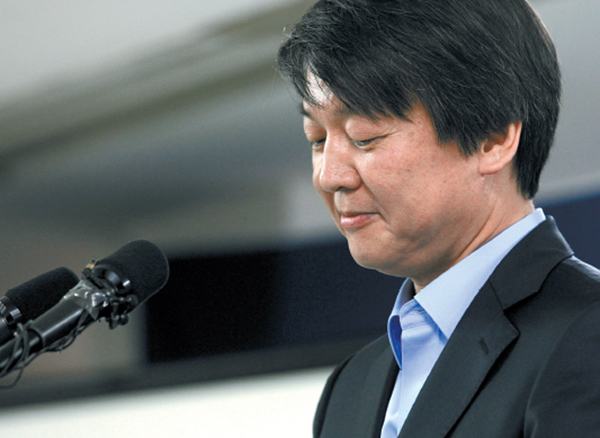 
Ahn Cheol-soo, the former liberal hope in the presidential race, spoke publicly for the first time since quitting the race Nov. 23, promising to stay in politics to bring about change.

He reiterated his support for Moon Jae-in, the candidate of the opposition Democratic United Party, in this month’s presidential election, but it was a brief and wan endorsement.

At a ceremony yesterday to formally wind up his aborted campaign, Ahn told enthusiastic supporters that he was in the political game for the long run in order to realize a vision of “new politics.” And he criticized both Moon and front-runner Park Geun-hye of the ruling Saenuri Party for conducting an old-fashioned mudslinging fight.

Ahn quit the race Nov. 23 after failing to come to terms with Moon about how to merge their runs.

Moon’s approval rating dipped after Ahn quit, and it appears that Ahn’s supporters are not moving to back Moon en masse.

“I will remember the wave of new politics and the hope for a new future that the people have created,” Ahn said yesterday. “And I will devote myself with a more audacious will.”

During his speech, Ahn asked his followers to support Moon, but the message was a short, lukewarm reiteration of his earlier endorsement.

“When I quit the race on Nov. 23, I told you that I would sacrifice myself to change the administration and asked you to support Moon,” Ahn said. “I believe my supporters will show generosity and accept my request.”

He also apologized to his supporters for quitting the race and then attacked the major presidential candidates for their campaign strategies.

Although he didn’t name any specific contender or party, it was clear that he was referring to both Moon and Park.

Ahn said the country can’t hope for a new future if such confrontational politics continues.

Telling his supporters that the disbanding of his campaign was not an end but a new beginning, Ahn said, “I will train myself more strongly and always stand on the path of new politics with you.”

“No hardships can break my will to be with you,” Ahn said.

As Ahn delivered the eight-minute speech, his supporters chanted his name several times. Some called him a “messiah of politics.”

Speculation was already high that Ahn would remain strictly independent after he met with Sohn Hak-kyu, a senior politician of the DUP who lost the party’s presidential primary to Moon. JTBC reported Thursday that Ahn and Sohn met for an hour on Nov. 26, quoting their aides.

Speculation grew quickly that Ahn was preparing a post-election political career and possibly a launch of his own party. Some analysts said it was possible for Ahn to rope in liberals who are disgruntled with Moon and his fellow Roh Moo-hyun loyalists’ control of the DUP.

With only 15 days left until the Dec. 19 presidential election, the Democrats have appealed for Ahn’s strong, unconditional backing of Moon, but have yet to get it. After Ahn quit the race, up to 50 percent of his supporters became undecided instead of moving to support Moon.

The Moon campaign’s chief spokesman Woo Sang-ho yesterday expressed his appreciation for Ahn’s reconfirmation of his endorsement. He said the campaign agreed with Ahn’s criticism, and downplayed the significance, saying, “He was just stressing his thoughts on new politics once again.”

The Park campaign said Ahn’s speech was all about his political ambitions for the future.

“Ahn was emphasizing the need for new politics, not his endorsement for Moon,” a senior Park campaign official told Yonhap News Agency. “He was justifying the reason for his staying in politics.”

Other Park campaign officials said Ahn’s message was not strong enough to shake up the presidential race and they will try to focus on winning over undecided voters.

In the latest JoongAng Ilbo poll, conducted last week, Park was ahead of Moon by 10.3 percentage points. It was the first time that the gap between Park and Moon widened beyond the margin of error, plus or minus 2.2 percentage points.

Park scored 48.1 percent, while Moon scored 37.8 percent in the survey conducted Friday and Saturday for which 2,000 voters were questioned through mobile and landline phones. Of the respondents, 1.4 percent said they supported other candidates, while 1.9 percent said they will abstain. The remaining 10.8 percent were undecided or gave no response.

It was evident that the gap was widening between Park and Moon. In a Nov. 24 poll, Park’s rating was 46.6 percent, while Moon scored 41.1 percent. Park was also leading the poll in the capital region of Seoul, Incheon and Gyeonggi, previously considered strongholds for Moon.