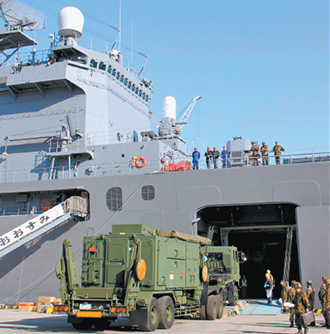 Despite international warnings, Pyongyang has put the first stage of a three-stage long-range rocket on its launchpad in Tongchang-ri in Pyongan Province, northwestern North Korea, according to a South Korean government source, pushing ahead with its second test under leader Kim Jong-un.

“It looks like North Korea already installed the first stage onto the launchpad on Saturday,” the source confirmed yesterday. “The move is seen as the first step in the process of launching a long-range missile.”

According to the source, the regime is expected to add the second and third stages, conduct an overall inspection, and then inject fuel before a final countdown.

The South Korean government expects the installation of the second and third stages to take three or four days, and a launch could be possible after a week. 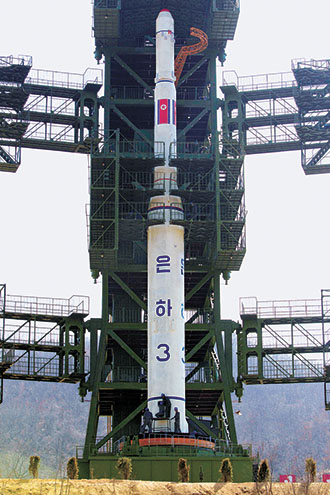 A file photo of North Korea’s Unha-3 rocket at the Tongchang-ri launch pad in North Pyongan Province on April 8. [AP/YONHAP]

On Saturday, North Korea said it will launch a long-range rocket between Monday and Dec. 22 to put what it calls a “working satellite” into orbit.

Other countries, including South Korea and the United States, suspect the regime is testing its intercontinental ballistic missile capability.

The planned launch will be the second this year following a failed attempt in April. That launch was part of celebrations marking the 100th anniversary of the birth of founder Kim Il Sung.

South Korean military sources suspect the second attempt could be to commemorate the first anniversary of the death of former leader Kim Jong-il, which falls on Dec. 17.

The South Korean presidential election will be held Dec. 19. Japan will also hold a general election on Dec. 16.

“We were able to confirm that since the summer, several Iranian rocket experts have been residing in North Korea to share the latest technology,” the source said.

South Korea and the United States have stepped up their surveillance activities by deploying satellites and spy planes to monitor the Tongchang-ri launch site.

The South Korean military also detected signs of preparations for live artillery drills at the North’s bases near the western sea border, according to military officials.

South Korea has beefed up its diplomatic efforts to restrain the North from launching the long-range missile.

Yesterday, the Ministry of Foreign Affairs and Trade called in four ambassadors and discussed measures to cope with the North’s planned launch.

Lim, who visited Beijing last week, will head to Washington today to meet with his counterpart, Glyn Davies, and discuss “how to get North Korea to drop its launch.”