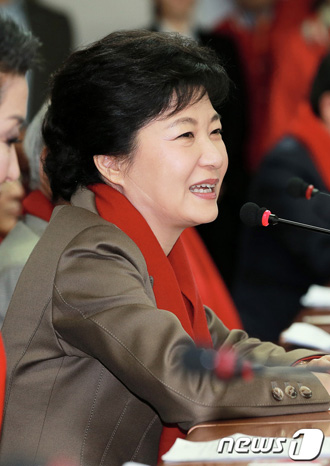 Veteran politicians with conservative backgrounds are uniting to support the presidential bid of Park Geun-hye, making her the most commanding politician on the political right in 25 years.

Some older figures from the left are also supporting her, particularly allies of former president Kim Dae-jung.

A grand conservative alliance to support the Saenuri Party’s Park appeared to be complete Sunday when longtime rival Representative Lee Jae-oh announced his decision to work for her campaign.

“Making a contribution to win another presidential election is the duty of our times,” Lee said. “Wherever I will be, I will support her.”

Throughout the presidency of Lee Myung-bak, the ruling party was split between Lee loyalists and Park loyalists. Representative Lee was a key leader of the pro-Lee faction.

Earlier this year, Lee declared his presidential ambitions but ended up boycotting the Saenuri Party’s primary in protest of the rules, which he called overly favorable to Park. Since then, he has been aloof from Park’s campaign. That position changed Sunday.

Representative Lee’s coming around was the de facto completion of Park’s plan to unify the conservatives, a feat that hasn’t been done since democracy was restored in the 1980s. 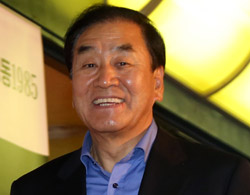 In 2007, there were two major conservative candidates: Lee Myung-bak and Lee Hoi-chang.

Park is running on a pledge of forging a grand national unity, and she is being backed by people on the liberal side of the political spectrum too.

More Kim loyalists have declared their support. Hahn Hwa-kap, nicknamed the “little DJ,” who has long led Kim loyalists, told the JoongAng Ilbo on Nov. 30 he would soon announce his support for Park.

According to sources close to Hahn, he met with other Kim loyalists on Nov. 29 and talked about his plan.

“I cannot join the Saenuri Party,” Hahn was quoted as saying by sources at the meeting, “But I can give my vote to Park.”

At the meeting, he also said it was impossible for him to support Moon Jae-in of the Democratic United Party, as the Kim loyalists suffered a serious political blow from Roh, Moon and their political allies when they created the Uri Party and left the Democratic Party in 2003.

Analysts said the Roh faction’s control of the Democratic United Party since April legislative elections could be the reason for Kim loyalists to support Park.

While older, diehard political bigwigs increasingly declared their support for Park, the Moon campaign tried to use them against her. Moon supporters said it was not a conservative alliance, but a rallying of politic relics from the past.

“Park has no future because she is living in the past,” spokesman Park Gwang-on of the Moon campaign said.