Pyongyang has questions for the frontrunner

Pyongyang has questions for the frontrunner

The Committee for the Peaceful Reunification of Korea, an organization under the ruling Workers’ Party that is in charge of responding to North Korean issues in the South, issued a statement Sunday in the party’s official newspaper, the Rodong Sinmun, asking seven questions about Park’s positions about North Korea.

“Recently, Saenuri’s Park Geun-hye is giving inconsistent pledges on North Korean affairs,” the statement read. “We strongly demand Park clarify her real position on the Northern issues and how she would deal with inter-Korean relation in the future.”

Pyongyang also lashed out at some of her public remarks, saying they are identical with the rhetoric of “traitor” Lee Myung-bak. 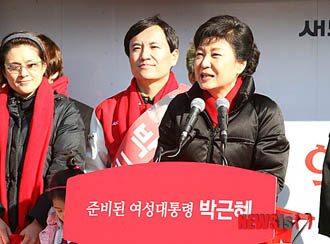 “Her pledge, dubbed ‘North Korea’s abandonment of nuclear weapons,’ is not different from Lee Myung-bak and his traitor group’s policies, called ‘denuclearization, market-opening, 3000,’?” the statement said. “For the past five years, the Lee administration has been outrageous with its anti-North fuss, driving inter-Korean relations into a catastrophic state.”

Park has called for Pyongyang to stop its nuclear weapons program as a precondition to restart economic cooperation between the two Koreas.

The Lee administration said it would help the North boost its economy up to the level of $3,000 per capita GDP if the regime gave up nuclear weapons and opened its economy to the outside world.

The North urged Park to ease the so-called “May 24 sanctions” imposed by the Lee administration after the sinking of the warship Cheonan in 2010, which halted most economic interactions. May 24, 2010 was the date they were announced.

Still, the North showed some courtesy for Park, calling her “Saenuri’s presidential candidate Park Geun-hye” while continuing to refer to president Lee as “traitor.”

Yang Moo-jin, a professor at the University of North Korean Studies, told the Korea JoongAng Daily that the questions are an apparent attempt by North Korea to get involved in the South’s politics, even though on Wednesday the Rodong Sinmun said it wasn’t trying to involve itself in them.