Third raid on a prosecutor in 3 weeks is done

Third raid on a prosecutor in 3 weeks is done 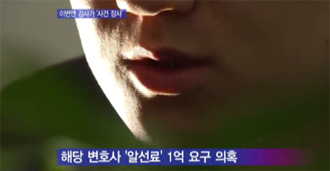 Another prosecutor is in hot water for allegedly bad behavior following two cases that erupted in recent weeks and helped force the prosecutor general from office.

The inspectors also raided Park’s home to collect evidence such as computer disks and documents.

Park is suspected of introducing a suspect in a misuse of medical drugs case to a law firm that employed his brother-in-law. Prosecutors are not supposed to recommend lawyers.

Senior prosecutors used the last two cases to mount a successful challenge against the leadership of Han Sang-dae, who was forced to resign last week. Han had tried to abolish the elite Central Investigation Unit, which handles high-profile cases. The rebellion started in that unit and was led by Choi Jae-kyung, chief prosecutor of the unit.

The 38-year-old Park probed a 2010 case involving illegal distribution and injection of propofol, an intravenously administered drug used for general anesthesia and sedation, and allegedly introduced one of the doctor suspects to his brother-in-law, who was a lawyer.

Reportedly, Park’s brother-in-law charged the doctor a high fee, almost 100 million won ($92,300), to represent him. Investigators are trying to determine if Park got a cut of the fee.

Former Prosecutor General Han Sang-dae had a retirement ceremony yesterday, at which he said, “The biggest challenge that I faced was to overcome arrogance within ourselves.

“We should get rid ourselves of overbearing haughtiness and choose the path that serves the people,” he continued.

Han’s nemesis Choi Jae-kyung, chief prosecutor of the Central Investigative Unit, offered his resignation Friday saying he should take responsibility for the internal discord but the prosecution returned his resignation yesterday. Choi reportedly said he would decide whether to submit his resignation again once an investigation of him is over. Han ordered the inspection on Choi last month after he learned that Choi sent text messages to a fellow prosecutor, Kim Gwang-jun, who was charged with taking 970 million won in bribes, on how to handle media inquiries.

The scandals have led both major presidential nominees, Park Geun-hye of the Saenuri Party and Moon Jae-in of the Democratic United Party, to take tougher stances on the elite investigators.