Eyeing the future of a heated Korea-Japan football rivalry

Eyeing the future of a heated Korea-Japan football rivalry 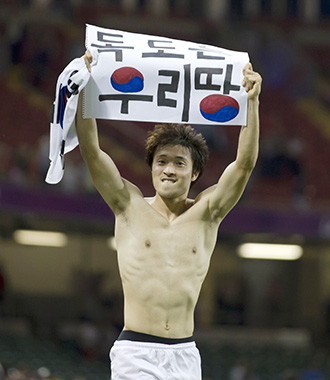 FIFA, the international governing body of football, announced its decision to suspend Park Jong-woo for two games on Monday, penalizing the 23-year-old midfielder for hoisting a political banner after winning a heated bronze-medal match versus Japan during the London Olympics.

The sign that read “Dokdo is Our Land,” referring to Korea’s easternmost islets over which Japan claims sovereignty, stole headlines after the match, intensifying an already acrimonious rivalry.

It was a gutsy move that shifted attention away from the most notable aspect of the showdown: the milestone of two Asian teams competing in an Olympic semifinal.

Asia’s only previous football medal was at the 1968 Mexico City Olympics, when Japan’s Kunishige Kamamoto’s two goals secured the bronze against the host nation.

Asian football is often derided by the footballing powerhouses in Europe and South America, the only continents to provide World Cup finalists, let alone winners.

But much has changed, with Korea and Japan both in the ranks of perennial World Cup qualifiers. For the two teams, their next goal should be to consistently progress to the later knockout stages of the competition.

Rewind to France 1998, Japan’s maiden World Cup and Korea’s fifth attempt at progressing past the group stage. Japan hung around long enough to be embarrassed by Jamaica before exiting the tournament with no points. Korea fared only slightly better, recording one point against mediocre Belgian opponents before suffering a 5-0 destruction at the hands of the Dutch.

While co-hosting the 2002 “World Cup of Smiles,” a phrase coined by FIFA President Sepp Blatter, Japan and Korea found the catalyst for change. Albeit on home soil, the pair progressed from the group stages, with Korea shocking the world with a semifinal run. Both countries advanced from the group stage again in South Africa eight years later.

The key question now is, which of the two is poised to challenge football’s elite at future World Cups?

Be that as it may, Korea’s former captain and talisman Park Ji-sung has retired from international play and there’s no adequate replacement in sight.

This has been exacerbated by an abundance of exciting Japanese players bursting onto the European scene.

Shinji Kagawa, Manchester United’s acquisition from German giants Borussia Dortmund, is a case in point. Kagawa, like Park before him, has not been signed for marketing reasons or to woo Asian fans. He is widely recognized for his vision, technique and deft passing.

Kagawa, along with Shinji Okazaki of VFB Stuttgart and Keisuke Honda of CSKA Moscow, are accomplished players amounting to tens of millions of dollars in transfer fees. And this trio is only the tip of the iceberg among other young Japanese plying their trade with top European clubs such as Inter Milan, Bayern Leverkusen and Wolfsburg.

In order to develop the national team, Korea has looked to its domestic K-League for new stars.

While Ki Sung-yeung of Swansea City and Son Heung-min of Hamburger SV are sure bets for a World Cup roster, changes to the domestic league may be the key to the national team’s future. The K-League’s newly implemented relegation system will create more competition and further foster the development of Korean players.

Yet while Korea is caught in a period of transition, this new breed of technically lucid, skilled Japanese footballers may charge ahead as Asia’s main threat for challenging the elite of Europe and South America.

Park and Team Korea had reason to celebrate after winning the bronze. But eyes should shift from the controversy after the game to the trajectories of both Asian powerhouses.