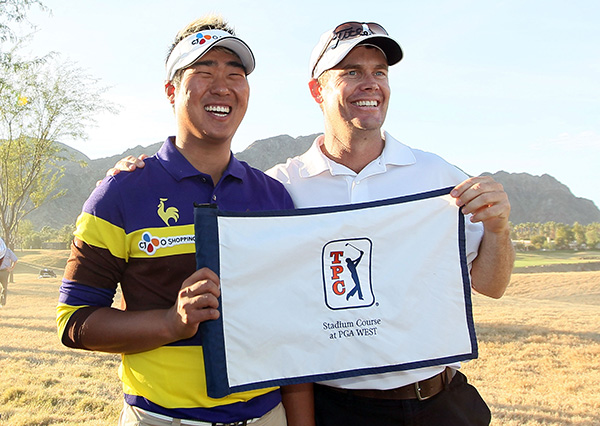 Lee Dong-hwan, left, and his caddie Jared Love pose after the sixth round of the PGA Tour Q-School final qualifying stage on Monday in La Quinta, California. Lee finished alone atop the leaderboard with a 407. [AFP/YONHAP]


Lee Dong-hwan has earned a spot on the U.S. PGA Tour next year with a historic Q-School score that the circuit’s Korean veterans, including Choi Kyoung-ju (K.J. Choi) and Yang Yong-eun (Y.E. Yang), never matched.

The 25-year-old finished first in the Qualifying School yesterday, Korea Standard Time, becoming only the second Asian player to do so. He is the first Asian to win the qualifying tournament outright, with Masahiro Kuramoto of Japan sharing the top spot with four others in 1992.

The Q-School is an extremely competitive PGA tournament that grants Tour cards to the top 25 finishers, plus ties, for the following year.

Lee carded a 25-under 407 at the six-day event at the TPC Stadium Course at PGA West in La Quinta, California. Three others - Ross Fisher, Steve LeBrun and Kris Blanks - were one stroke behind.

The Korean charged to the top of the leaderboard after the fourth round with an eight-under 64, but dropped down into a tie for sixth after a one-under 71 in the fifth round. He surged back with a five-under 67 on the final day, birdying the final three holes.

“My initial goal was to get to the final stage,” he was quoted as saying by Yonhap News Agency. “I didn’t expect to win.”

Twenty-five other golfers earned PGA Tour cards through the tournament, including another Korean, Kim Si-woo, and two Korean-Americans, Richard Lee and Park Jin. Kim earned the honor as the youngest to pass the Q-School at the age of 17 years and five months.

But it was Lee Dong-hwan who hit close to home with his perseverance through an up-and-down career.

It was his second attempt at the Q-School after he failed to make the cut in the 2007 tournament. A two-time winner on the Japan Golf Tour, Lee made his name in Japan, where he became the first Korean and youngest-ever amateur champion in 2004.

After the initial failure in the Q-School, he spent more than two years in the Korean Air Force for compulsory military service, which he could have avoided legally.

After qualifying for the JGTO in 2006, he chose to play immediately on the circuit instead of playing for the Korean national team during the 2006 Doha Asian Games.

The Korean national team won the gold medal in the event and its members, including Kim Kyung-tae and Kim Do-hoon, were exempted from the military service based on the Korean military law exemption clause.

That may have motivated Lee, who won the JGTO rookie of the year award in 2006. He earned his first professional victory at the Mizuno Open Yomiuri Classic in 2007, where he became the youngest winner at the age of 20 years and two months, and won another last year at the Toshin Golf Tournament in Lakewood.

He also played in the Million Yard Cup in July in Japan, a Korea-Japan rivalry where he contributed to Korea’s victory.

But the PGA Tour, which had alluded him until now, is his next challenge. Lee will make his debut in the Sony Open, to be held in Hawaii in February.

He said that his goal is to finish in the top 125 on the PGA Tour next year so that he can continue to play on the circuit.