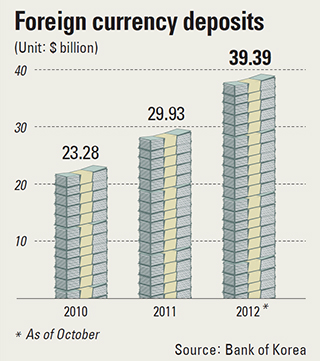 The government’s move to regulate the foreign exchange market is likely to gain momentum as the International Monetary Fund has changed its stance on the issue.

The Ministry of Strategy and Finance said it will let banks build up their foreign currency deposits.

It will also monitor foreign investments more closely with the revision of the foreign exchange transaction law, passed at a cabinet meeting yesterday.

The revision, which follows on from a plan unveiled in September to boost foreign currency deposits, is aimed at stabilizing levels of foreign capital to avoid market volatility.

The move will provide banks with tax deductions aligned with the size of their foreign currency holdings, the ministry said.

The so-called “bank levy” was introduced in August 2011 to prevent banks from making excessive short-term overseas borrowing. It imposes a tax of two to 20 basis points on banks’ non-deposit foreign debt.

The deduction rate will rise in proportion to the size and maturity of foreign currency savings, according to the revised law.

Newly opened foreign-currency denominated savings accounts will receive more deductions. However the specifics have not yet been decided.

The government believes foreign currency deposits can serve as a safeguard in the event of a national financial crisis.

“Foreign currency deposits can provide greater foreign-exchange security, along with foreign reserves, because they provide retail funding that is more stable than wholesale funding, which includes foreign borrowing and bond issuances,” said Kim Hee-cheon, an official at the ministry.

The revision is also expected to improve the country’s foreign capital supply, which has been heavily dependent on external borrowing and bonds, he added.

Foreign currency deposits hit a new high of $39.39 billion in October, with companies making up about 90 percent of the total.

The ministry also said that from today the government will enhance its monitoring of foreign investments. Those made by foreigners will be categorized into stocks, bonds and derivatives.

Until now, this distinction has been harder to make once foreign capital has entered the market.