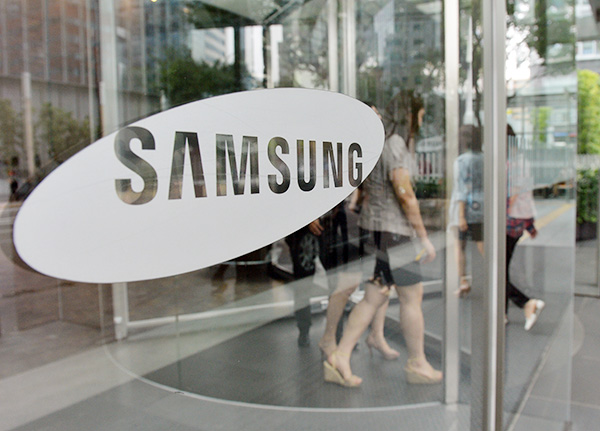 After hitting a record high on Nov. 23, Samsung Electronics’ share price has been hovering around 1.4 million won ($1,292). At the same time, the main bourse is mired in the 1,900 range with no momentum to push it up.

While the Samsung flagship saw its share price jump 9.9 percent from Nov. 19 to Nov. 23 - its ninth-biggest weekly growth since 2008 - the Kospi inched up just 2.7 percent over the same period.

Some experts say that without Samsung Electronics, the local stock market wouldn’t even be in the 1,900 range, but would be struggling closer to 1,800.

In fact, the rest of the top 10 biggest players on the bourse by market cap including steel manufacturer Posco fall short of Samsung Electronics, testament to its colossal stature.

Its market cap has grown exponentially by comparison, surging 250 percent from end-2007 to end-2008 despite the impact of the global credit crunch. Posco was less fortunate: Its market cap halved from 50 trillion won in late 2007 just before the crisis took effect to 27 trillion won now.

Although Samsung Electronics’ share price dipped last week, losing roughly 2 percent on-week, experts expect it to keep climbing for the rest of the year and post a strong Q4 result on the back of robust smartphone sales.

FNGuide, a stock information provider, estimated that in the fourth quarter it will post operating profit of 8.15 trillion won, up 0.33 percent from the previous quarter and up a huge 53.9 percent from the final quarter of 2011.

Daishin Securities was even more upbeat, putting the predicted figure in excess of 9 trillion won.

With such high expectations, some brokerage firms are betting that its share price could climb another 20 percent or so to 1.74 million won by the end of the year. Some, like NH Investment & Securities, say it could break 1.9 million won.

“Last year the investors were mostly flocking to automobiles, refiners and chemical stocks,” said Lee Kyung-min, an analyst at Woori Investment & Securities. “But recently the market has been reorganized, with most investors flocking to Samsung Electronics.”

Meanwhile, the stock market has limited movement. Especially considering there’s only a 280-point difference between this year’s highest peak and lowest trough, marking the narrowest trade since the global crisis in 2008.

The Kospi started off the year on an optimistic note, moving up to 2,000 in February and reaching over 2,050 in March. In the first three months, foreign investors contributed to the bullish rally by net buying more than 11 trillion won worth of stocks. 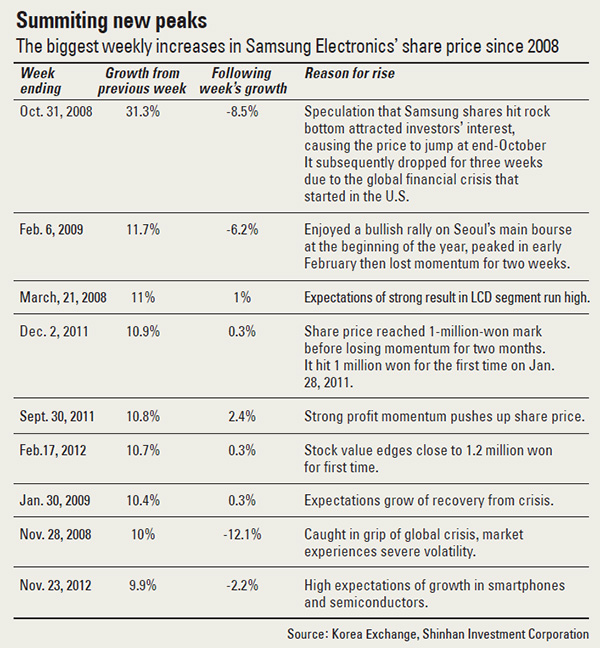 But it didn’t last long as the fiscal crisis in Europe once again clouded the market and major economies saw growth slow.

The local stock market tumbled back to the 1,700 range in May as foreign investors started dumping their shares.

In September, things started looking brighter after the U.S. announced its third round of quantitative easing to stimulate the global economy. This helped the Korean stock market gain more than 60 points to recover back to 2,000. But it once again stumbled due to disappointing third-quarter performances.

According to the Korea Exchange, between July and September the accumulated operating profit of 630 companies amounted to 50.2 trillion won. This is a 4.74 percent drop from the same period last year.

“Improved external situations [such as the easing fiscal crisis in the euro zone and recovering economic growth in China and the U.S.] are having a positive impact on investor sentiment vis-a-vis the local stock market,” said Han Beom-ho, an analyst at Shinhan Investment. “But investors remain deeply concerned about other stocks if Samsung keeps influencing the Kospi’s movement so much.”

Song Min-gyu, an analyst at the Korea Institute of Finance, said the Kospi is excessively affected by big caps.

“This could create a problem once investors start dumping these shares,” Song said. “For the market to be stable investors need to diversify their holdings.”