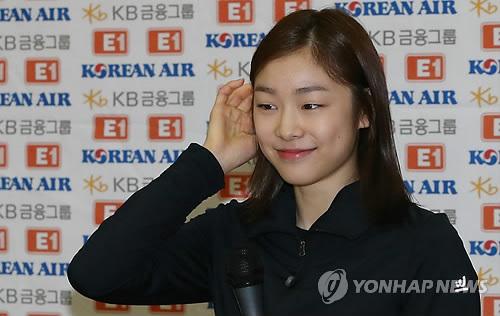 Kim Yu-na speaks to the press on Oct. 24, 2012, in Seoul to announce her coaching changes. (Yonhap file photo)

South Korean figure skating star Kim Yu-na is set to make her first competitive appearance in more than a year this weekend in Germany.

Kim is entered in the NRW Trophy in Dortmund, Germany, with the short program scheduled for Saturday, followed by free skating on Sunday. This will be the first appearance of the season for the 2010 Olympic champion. Her last competitive event was the 2011 world championships in Moscow in April of last year. She has since appeared only in corporate ice shows. 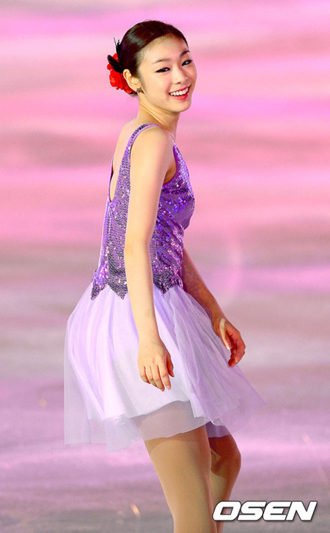 Kim will fly out to Germany on Wednesday and will meet with the local press at Incheon International Airport before her departure.

After sitting out the entire 2011-12 season while mulling over career options, Kim announced in July this year that she would return to competitive skating in 2012, with an eye on the 2014 Winter Olympics in Sochi, Russia.

Then in October, Kim reunited with two of her childhood coaches, Shin Hye-sook and Ryu Jong-hyun, while parting ways with Peter Oppegard, her American coach of two years.

Since she has missed recent major events, such as the International Skating Union (ISU) Grand Prix stops last year and this year and the 2012 world championships, Kim has to earn enough technical points to qualify for the 2013 worlds in London, Ontario.

The NRW Trophy is a minor competition for skaters needing to score points for world championships. However, organizers have claimed Kim's presence helped made it a higher-profile event for this year, saying all tickets were sold out within six and a half hours.

The NRW Trophy will be held on the same weekend of the ISU Grand Prix Final, usually the marquee figure skating competition this time of the year, which brings together winners and other high finishers from six Grand Prix events since October. This year's Grand Prix Final will take place in Sochi.

To book a spot in the world championships, Kim needs to earn at least 28 points in her technical element score (TES) in short program, and at least 48 points in TES in free skating.

Though she has been missing in action for 20 months, Kim should easily eclipse those qualifying scores. At the 2011 world championships, Kim had 32.97 points in TES in her short program, and 61.72 points in her free skating.

Kim will skate her short program to "The Kiss of the Vampire," from the original sound track for the film of the same name from 1963. Her free skate will be performed to a compilation of songs from "Les Miserables," a musical based on the classic novel by Victor Hugo. Following her coaching changes, Kim remains with her Canadian choreographer, David Wilson.

In Kim's absence, the competition in ladies' figure skating has been underwhelming at best. In six Grand Prix events, Ashley Wagner of the U.S. was the only skater to score more than 190 points in total. In her previous seasons, Kim routinely topped 190 points and surpassed 200 points three times.

When announcing her coaching change, Kim said she had retained a feel for her jumps and the focus of her training would be on strength and conditioning. (Yonhap)