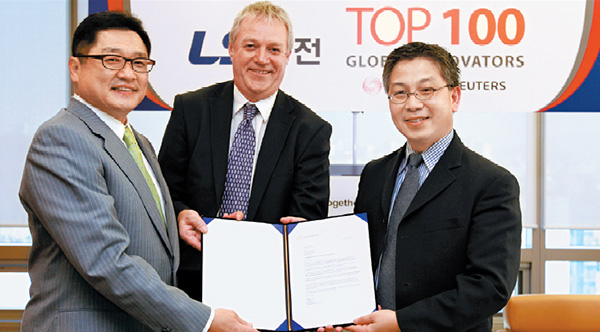 From left, Koo Ja-kyun, vice chairman of LSIS; Bob Stembridge, executive director at the IP & science business division of Thomson Reuters; and Woei Fuh Wong, chief of the Asia-Pacific unit of the consulting group, hold up a certificate marking it as one of the Top 100 Global Innovators at LSIS’s headquarters in Anyang, Gyeonggi, yesterday. Provided by the company


LS Industrial Systems (LSIS), a leading power substation builder, said yesterday it has been recognized as one of the world’s 100 most innovative companies by Thomson Reuters, a global consulting group, for the second straight year. Samsung Electronics also made the list.

“LSIS’s consistent investment efforts in cutting-edge power technology contributed to maintaining its position as one of the 100 selected companies,” said Koo Ja-kyun, vice chairman of the company.

It has achieved world-best status in terms of influence and the quality of its patents, said Bob Stembridge, executive director at the IP & science business division of Thomson Reuters.

He said Korea needs to support more innovative companies like LSIS so they can spread their outstanding technology from the Asia-Pacific region to the rest of the world.

LSIS has secured a number of standard patents in the electricity field since 2008. Last year, it reinvested 8.9 percent of its sales into research and development. It also completed two new plants, one in Busan and the other in Cheongju, this year.

The IP & science business division of Thomson Reuters publishes its Top 100 Global Innovators list every year in honor of the world’s leading innovators as measured by a series of proprietary patent-related metrics.

A total of seven organizations from Korea made the list, including the only two university recipients worldwide, Kaist and Postech.