3 candidates face off in first debate

3 candidates face off in first debate 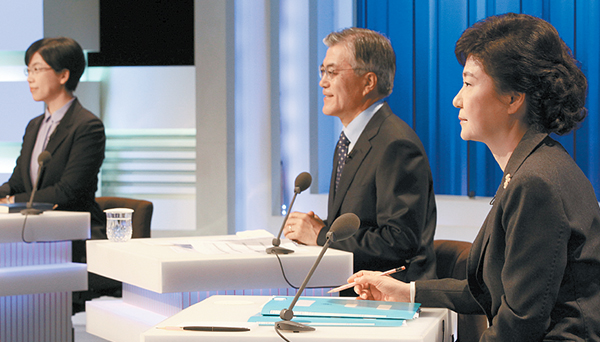 The biggest contrasts came in their policies toward North Korea.

Park Geun-hye of the conservative ruling Saenuri Party, Moon Jae-in of the opposition Democratic United Party, the largest liberal party, and Lee Jung-hee of the minor opposition Unified Progressive Party (UPP), attended the debate, which was aired live around the country.

Frontrunner Park was conservative on North Korea, saying that “trust building” between the Koreas was needed. She said there were no conditions for talks or humanitarian aid, and that a summit was possible.

Moon said he would follow through with the agreement reached in 2007 after a summit between the two Koreas.

Lee blamed the Lee Myung-bak government for bad relations on the peninsula and said Park shared the blame.

The three contenders were given two-minute opening remarks and Lee didn’t hide her animosity toward Park. She said her goal was to stop the Saenuri Party from winning power again and vowed to win the election for the sake of the country’s workers.

Moon began his opening remarks by apologizing to the people for disappointing them with business-as-usual politics and promising something better in the future.

“Unless both sides change, we have no hope,” Moon said. 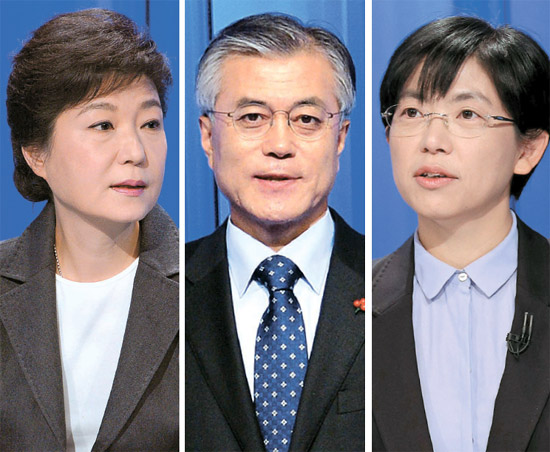 Park promoted her vision of a “grand national unity” in her opening remark. “To overcome the economic crisis to come next year, we need unity, not division,” she said. “What we need is a president who looks after the people’s livelihoods. And I will be the president who will open the era of a 70-percent middle class.”

Following the opening remarks, the three candidates debated political topics. They each answered questions from the public. Three one-on-one exchanges between Lee and Moon, Moon and Park and Park and Lee followed.

Park and Moon both promised to end Korea’s confrontational politics. While Park promised politics free from corruption and power abuse, Moon highlighted the DUP’s plan to have lawmakers give up privileges.

Lee verbally attacked Park. Calling her the “root of a pro-Japanese faction,” “a relic of dictatorship” and “shameful politics from the old days,” Lee said the only political reform she could imagine was the disappearance of the Saenuri Party.

Moon said the administration of former president Roh Moo-hyun, in which he served, failed to meet public expectations to stop the widening wealth gap, although it succeeded in the development of political democracy and development of inter-Korean relations. Moon said his economic democratization and welfare pledges are meant to follow through on the Roh government’s shortcomings.

He also criticized Park and the Saenuri Party for rejecting the liberals’ demand to extend voting hours on Election Day.

During a Moon-Park exchange, the two contenders agreed that the ruling and opposition parties should work together on overlapping pledges as soon as possible, even before the next president begins his or her term in February.

Park asked Moon to define the identity of his party, reminding him that the DUP was allies with Lee’s party during the April general election. Park asked if Moon still supported the alliance with Lee’s UPP, which wants to scrap the Korea-U.S. alliance and the Korea-U.S. free trade agreement.

Moon made clear he was keeping distance from Lee and her party.

“If the UPP reforms and regains the people’s trust, there is nothing barring us from having an alliance,” Moon said. “But I don’t think it is in that situation now.”

Throughout the debate, Lee made clear her hostility toward Park, calling her a “queen” and “imperial leader.” Park sometimes responded with emotion, but remained generally calm and refrained from attacks on Lee.

Before the debate started, the Park campaign said its candidate would try to promote her strong, conservative views.

The Moon campaign said its candidate would try to impress voters with Park’s joint responsibility for the failing of the current Lee administration.

Moon’s strategists also said he will try to maintain a distance from Lee to avoid being labeled pro-Pyongyang on North Korea issues.

Lee represents the UPP, which was marred with pro-Pyongyang scandals earlier this year. In the past weeks’ opinion polls, she recorded no more than 1 percent support, but she could be a crucial factor if the race between Park and Moon turns out to be tight.