Delay in drills due to Pyongyang rocket plan

Delay in drills due to Pyongyang rocket plan

South Korea’s military postponed a couple of drills and maneuvers as the North prepares to test a long-range rocket within the next two and a half weeks.

“We decided to conduct the Marines’ regular live-fire exercise, which was supposed to be on Dec. 7 [Friday], after Dec. 21,” a military official told the JoongAng Ilbo yesterday. “The Navy’s maneuver plan, which was scheduled for Dec. 12 and involved an Aegis-equipped fleet, has been also delayed for an indefinite period.”

The Ministry of National Defense and the Joint Chiefs of Staff have formed a joint crisis management task force team, headed by a one-star general, to strengthen monitoring of North Korea’s military. 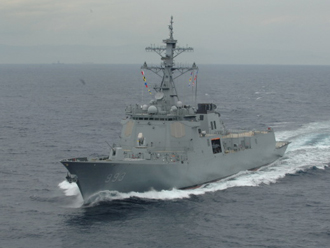 “The live-fire drill and the naval maneuver had been scheduled before the North’s announcement,” the official added. “However, after the North pushed forward with the missile launch plans, we decided to postpone them and raise the alert on a possible military clash.”

“About 10 members of the task force will stay in the operation control office and be in charge of closely monitoring the situation in the North and analyzing it,” Kim Min-seok, Defense Ministry spokesman, told reporters yesterday. “The military has tightened vigilance and intensified its surveillance system, using all of its information and assets.”

The military was supposed to send 7,600-ton Aegis destroyers on a naval maneuver scheduled to be held in the South Sea. However, after North Korea announced it would fire the rocket between next Monday and Dec. 22, the military decided to dispatch them to the Yellow Sea and the southern waters off Jeju Island.

The North has reported to the International Maritime Organization that it will fire a rocket southward and that the first stage will drop into the Yellow Sea and the second into the waters off the eastern Philippines.

In order to trace the trajectory of the rocket, the military will use the 7,600-ton Aegis-equipped warship King Sejong, which was also used during the North’s botched missile launch in April, and the Seoae Ryu Seong-ryong, another 7,600-ton, newly launched Aegis destroyer.

“The King Sejong warship has lots of experience detecting rocket launches, including the launch in April, so it will be mobilized in the Yellow Sea,” a military official said. “The recently built Seoae Ryu Seong-ryong will be dispatched to the waters south of Jeju Island.”

A government official said the postponement of the live-fire exercise was ordered by the Blue House because the area of the drill is beneath the North Korean rocket’s trajectory.

“Ten days before the presidential election, we want to block all possibility [of a military clash],” a Blue House official said.

“The North could cause a provocation like the shelling of Yeonpyeong Island in November 2010 when the South’s Marines were conducting a live-fire exercise.”