Moon’s fate could hinge on Ahn’s level of support

Moon’s fate could hinge on Ahn’s level of support 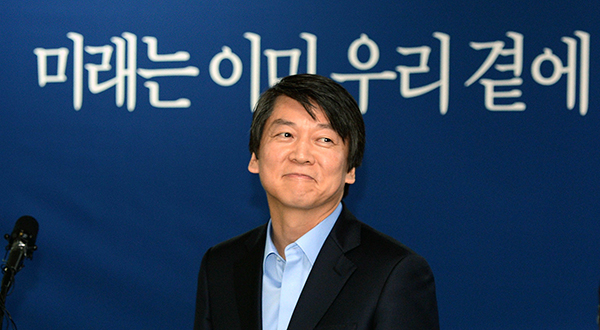 
Members of the Democratic United Party’s Moon Jae-in’s campaign yesterday kept their hopes up that Ahn Cheol-soo, a liberal candidate who recently dropped out of the presidential race, would strengthen his support for Moon, stressing that Ahn is still a game changer.

“Now, it will be a battle of Park Geun-hye, Lee Hoi-chang and Rhee In-je versus Moon Jae-in, Ahn Cheol-soo and Sim Sang-jeong,” he said. “I believe Ahn’s activities to support Moon will have the strongest impact on the presidential election.”

Showing confidence that many of the undecided voters will move to support Moon after Ahn’s remarks on Monday, the chief strategist said he believes Ahn will use creative methods to support Moon.

“Although we have some thoughts on how he can effectively support us, we left it up to Ahn,” Rhee said.

On Monday, Ahn broke his silence for the first time since he dropped out from the race on Nov. 23 after failing to come to terms with Moon on how to merge their presidential bids.

While Ahn devoted the majority of his 8-minute speech to his desire for a new form of politics, the former candidate spent about 20 seconds reminding his supporters to back Moon.

The Moon campaign overtly expressed hope that Ahn would more aggressively back the DUP.

“He won’t likely register as an official member of Moon’s campaign,” said Representative Woo Sang-ho, chief spokesman of the Moon campaign, in his interview with MBC radio yesterday.

“But he can use various ways. Although there is no official talk going on now to discuss the methods, there are some private conversations taking place.”

As to the Moon-Ahn meeting, Woo said it is desirable for them to meet, although there is no specific plan yet.

Asked by reporters how he will support Moon’s campaign on Monday, Ahn remained tight-lipped.

According to the current election law, Ahn is able to tour the nation in his private capacity and appeal to voters to support Moon. He can also hold press conferences and appear on TV to give speeches. He can also speak at Moon’s stumping events.

Ahn, however, is barred from hosting gatherings or lectures to support Moon.

Ahn and his former campaign strategists gathered at the old campaign headquarters yesterday afternoon, fueling speculations about Ahn’s next move.

Yoo Min-young, Ahn’s spokesman, said they are collecting public opinion on how to better support Moon and denied speculation that they will jointly participate in Moon’s campaign.

The Moon campaign has already prepared TV commercials with Ahn in them. A senior source told the JoongAng Ilbo that the campaign will seek Ahn’s permission to use the advertisement.

Other sources said they hope for Ahn’s participation in stumping events of battle grounds such as Seoul, Gyeonggi, Busan, South Gyeongsang and Chungcheong. Issuing more endorsements through social networking services and elsewhere online are also possible contributions the Moon campaign expects from Ahn.

According to OhMyNews, a key Ahn aide told the Internet news site on Monday that Ahn would begin activity to support Moon this week.

“Ahn said he will start this week,” the report quoted the source as saying. “Ahn will start the support activity for Moon on Wednesday or Thursday.”

The Park campaign and the Saenuri Party yesterday used the situation to attack Moon further.

“Moon prepared the Gwanghwamun stumping events twice on Nov. 27 and Monday with the hopes that Ahn will show up,” said Representative Cho Hae-jin, spokesman of the Saenuri Party’s central election committee.

“It was a pity to see Moon waiting for Ahn. The attitudes of Moon and the DUP are making Ahn the centerpiece of this election. Moon is not deciding his own fate. Ahn is deciding his fate.”

Many observers said Ahn’s latest message alone was not enough to boost Moon’s falling rating. In the JoongAng Ilbo’s poll conducted Friday and Saturday, Park was ahead of Moon by 10.3 percent.

Of the 2,000 polled, 547 said they were originally Ahn supporters and 15.5 percent of them remained undecided as of last week, while only 54.8 percent moved to back Moon. Of the former Ahn backers, 23.7 percent moved to support Park.

The 15.5-percent of undecided Ahn supporters would translate to 4.24 percent of the total voters, and the number is significant to sway the election.